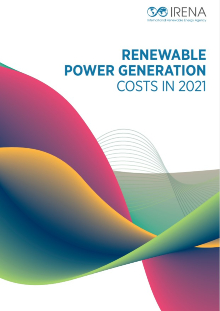 The global weighted average cost of newly commissioned solar photovoltaic (PV), onshore and offshore wind power projects fell in 2021. This was despite rising materials and equipment costs, given that there is a significant lag in the pass through to total installed costs.

The period 2010 to 2021 has witnessed a seismic improvement in the competitiveness of renewables. The global weighted average LCOE of newly commissioned utility‑scale solar PV projects declined by 88% between 2010 and 2021, whilst that of onshore wind fell by 68%, CSP by 68% and offshore wind by 60%.

See the interactive infographic on how Competitiveness of Renewables Continued amid the Fossil Fuel Crisis.

The benefits from renewables in 2022 will be unprecedented, given the fossil fuel price crisis:

The data suggests that not all of the materials cost increases witnessed to date have been passed through into equipment prices. This suggests that price pressures in 2022 will be more pronounced than in 2021 and total installed costs are likely to rise this year in more markets.