“We may never see oil demand return to 2019 levels,” said Dr. Thijs Van De Graaf, lead author of ‘A New World’ – an influential report published two years ago by the IRENA-convened Global Commission on the Geopolitics of the Energy Transformation, and participant at the second meeting of IRENA Collaborative Framework on the geopolitics of energy transformation.

“Oil reserves in the ground can no longer be viewed as money in the bank,” he explained, highlighting that changes witnessed so far this year to energy demand and energy use as a result of the measures enforced to control the spread of COVID-19, may have irreversibly changed the energy landscape.

Kingsmill Bond, Energy Strategist at Carbon Tracker, agreed the pandemic is likely to have brought forward the peak for fossil fuels and advanced the transition. With it, he said, investor thinking had moved from “denial, to acceptance and enthusiasm” – a message to policy makers about changing investor preferences. “Markets are a lead indictor of the change that is coming to geopolitics; ignore their message at your peril,” he said.

These observations served as a backdrop to a meeting that brought representatives from across the IRENA Membership, together with academics and energy market analysts to identify and agree areas of specific focus to guide IRENA’s future work on the topic.

The discussion was co-hosted by IRENA Director-General, Francesco La Camera, Michael Klor-Berchtold, Director-General for the Department for Economic Affairs and Sustainable Development, at the Federal Foreign Office in Germany, and H.E. Dr. Nawal Al-Hosany, the UAE’s Permanent Representative to IRENA. The meeting also featured special interventions from academics and strategists. 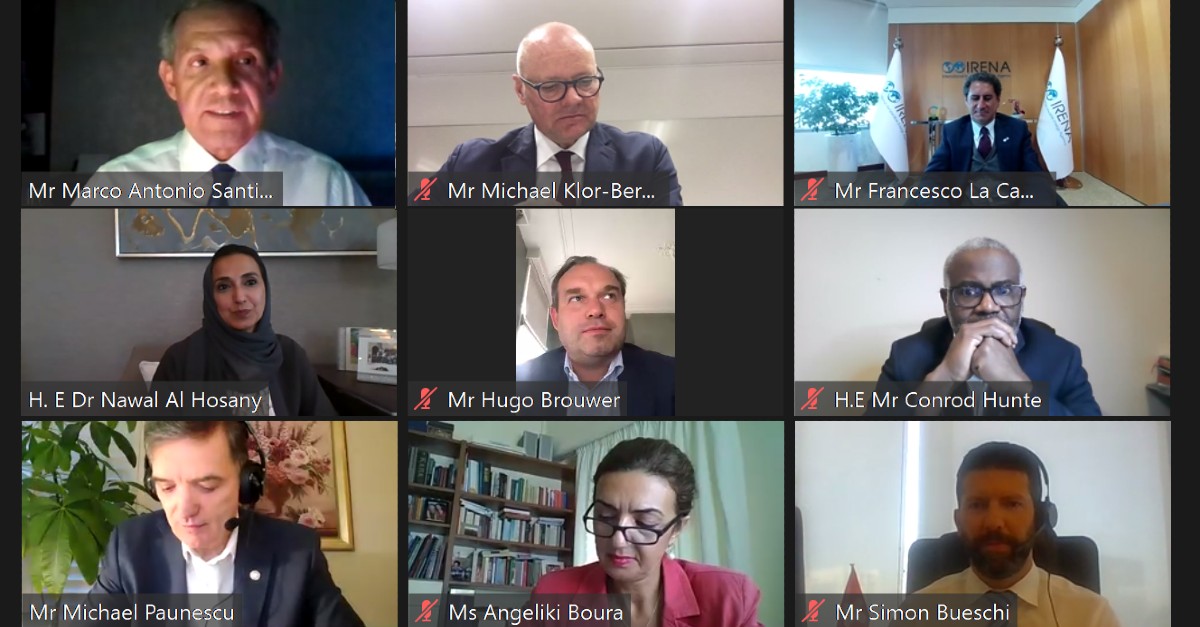 At the heart of discussions was the need to find consensus on the topics of most interest to Members, recognising that any future work should reflect a balance of interests from across the Membership. One such topic was green hydrogen – an emerging technology with the potential to play a key role in decarbonising sectors such as transport and industry.

“Hydrogen will have a fundamental impact on geopolitics and alter the position of states in the international energy system and beyond,” said Dr. Kirsten Westphal, Senior Associate, German Institute for International and Security Affairs. “The emergence of the hydrogen economy will prompt countries to reevaluate value and production chains and to deepen their hydrogen capabilities.”

Germany proposed to deepen the work on geopolitics of green hydrogen together with the increasingly critical nexus of climate and security as specific areas of further analysis – a suggestion met with broad agreement from Members.

There can be little doubt that the profound shifts being witnessed in energy today are becoming of increasing relevance to the work of the global foreign policy community. Climate and security issues are increasingly being put forward as UN Security Council agenda items.

Members agreed that IRENA is uniquely positioned to help navigate current and future uncertainties as the rise of renewable energy reconfigures the geopolitical map. Discussants reinforced the importance of IRENA’s leadership on the issue, emphasizing that the new, low-carbon energy system presents unique opportunities for a more just and inclusive society.

IRENA Director-General, Francesco La Camera, agreed: “By the very nature of renewable energy, our energy future will be more just than the energy system of the past.” But he acknowledged the role of the global policy community in delivering that future. “We are witnessing the most significant intervention by policy makers in national economies for possibly the last 50 years. The unprecedented level of support put forward to rebuild economies needs to be channeled correctly.”

It was proposed that the Framework’s co-facilitators Germany and the UAE, report back to the two annual IRENA Council meetings, updating Council members on developments in the geopolitics of energy and on the work being undertaken under this stream of IRENA work.

In closing remarks Director-General La Camera highlighted that co-operation around the geopolitics of energy is essential to shaping new and emerging relations in a way that is beneficial for all.

Whatever the future holds, the need for deeper geopolitical analysis is urgent as the energy transformation enters a new phase. “Oil demand has been growing for 200 years,” said Kingsmill Bond. “Financial markets speed up the process of change. Investors are now pricing in the transition.”