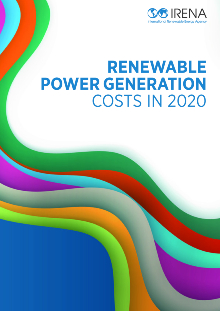 The decade 2010 to 2020 saw renewable power generation becoming the default economic choice for new capacity. In that period, the competitiveness of solar (concentrating solar power, utility‑scale solar photovoltaic) and offshore wind all joined onshore wind in the same range of costs as for new capacity fired by fossil fuels, calculated without financial support. Indeed, the trend is not only one of renewables competing with fossil fuels, but significantly undercutting them, when new electricity generation capacity is required.

See the interactive infographic on how Low Renewable Costs Allow To Power Past Coal.

Between 2000 and 2020, renewable power generation capacity worldwide increased 3.7‑fold, from 754 gigawatts (GW) to 2 799 GW, as their costs have fallen sharply, driven by steadily improving technologies, economies of scale, competitive supply chains and improving developer experience. Costs for electricity from utility-scale solar photovoltaics (PV) fell 85% between 2010 and 2020.

IRENA’s cost analysis programme has been collecting and reporting the cost and performance data of renewable power generation technologies since 2012. The two core sources of data for the cost and performance metrics contained in this report are the IRENA Renewable Cost Database and the IRENA Auctions and Power Purchase Agreement (PPA) databases. This year, for the first time, the report also includes a snapshot of IRENA’s cost data for behind‑the‑meter battery storage and solar thermal technologies for industrial heat.

Along with reviewing overall cost trends and their drivers, the report analyses cost components in detail. The analysis spans around 20 000 renewable power generation projects from around the world, along with data from 13 000 auctions and power purchase agreements for renewables.