After a two-year hiatus due to the global pandemic, COP26 yielded important results, while at the same time leaving no doubt that even more ambitious action will be needed if we have any hope of holding temperature rise to 1.5° C.

As always, COP is an ecosystem made up of formal negotiations amongst Parties, thematic events hosted by the COP presidency and the High-Level Climate Champions of COP25 and COP26, official side events organized under the auspices of the UNFCCC, and events held in the pavilions of governments, business and civil society. As a result, the success of a COP can be measured not only in the outcome of the official negotiations, but as the sum of raised ambitions amongst all of those who participate.

IRENA’s presence at the COP was significant, despite the severe limitation of the in-person delegation size due to health consideration. Our objective was to showcase evidence of how the global energy transition is progressing, where momentum is increasing, but also where more work urgently needs to be done. In addition to a full schedule of bi-lateral meetings with the Agency’s Members and other partners, the following describes some of the highlights from IRENA’s two weeks in Glasgow.

Three major energy-themed mini-conferences took place 4-5 November within the blue zone of the COP, under the auspices of the COP Presidency, the Marrakech Partnership for Global Climate Action, and the EU.

IRENA is the focal point for the energy thematic group within the Marrakech Partnership, and was the lead agency responsible convening this year’s Energy Action Event: Disrupting the Status Quo: Accelerating the Global Energy Transition for a 1.5°C Future.

This event, aimed at catalysing and showcasing accelerated action to meet the goals of both the Paris Agreement and SDG 7 on sustainable energy, brought the Climate Action Pathway for Energy  to life with sessions on: the latest developments in decarbonizing the power sector; the coming-of-age of green hydrogen in hard to abate sectors; what energy system change means in practice; reshaping fossil fuel economies as they transition to renewable energy futures; and how to ensure the energy transition puts people first and leaves no one behind.

The event featured a broad spectrum of speakers from different areas of the energy sector and from around the world, including representation from virtually every continent. Youth representation provided a powerful call to action. Panel sessions had one or two representatives from national governments presenting effective policies in their countries or regions, followed by discussion between private sector, sub- national and civil society stakeholders who shared not only their successes, but the challenges and barriers they face, thereby challenging those who have the power to unblock conflict and drive momentum.

IRENA, together with the World Economic Forum also launched the Enabling Measures Roadmap for Green Hydrogen, which aims to empower policymakers to prioritise policies for green hydrogen and accelerate its deployment at the international level in pursuit of a net zero energy system aligned with a climate-safe 1.5°C scenario.

Also on November 4, the COP26 UK Presidency event Making the Global Transition to Clean Power a Reality, convened by the Energy Transition Council in Plenary, provided a platform for senior figures from governments and international organisations to announce and discuss new measures to scale up clean power more quickly, shift away from coal and ensure access to affordable, sustainable energy for all. IRENA chaired a discussion about scaling up clean power to deliver sustainable energy for all.

On 5 November, during the EU Energy Day, IRENA and EU co-organised a session on the Potential of Offshore Energy and Green Hydrogen to Power the Global Energy Transition where IRENA’s Director General spoke about the potential of offshore wind and green hydrogen as a secure, clean and economically viable option to drive the decarbonisation of the energy sector.

On 4 November, an event co-hosted by Denmark, IRENA, and the United States of America at the US pavilion, Expanding Global Wind Ambition in Pursuit of a Clean Energy Economy, highlighted the growth of the offshore wind sector across the world and its critical role as an ocean-based climate solution. In this event, the Director General provided a global context on the need to expand global wind ambition, and at the close of the event countries were invited to join planning efforts for an intergovernmental Global Offshore Wind Alliance (GOWA) expected to be launched in 2022.

The following day, the Director General made a keynote address to an event co-hosted by the Global Wind Energy Council and the Because the Ocean initiative at the Wind Pavilion, focused on the massive potential of the ocean to be a key energy solution.

IRENA launched a new report highlighting the work done by the agency supporting the NDC review process. IRENA's Energy Transition Support to Strengthen Climate Action describes the Agency’s support for 72 Parties of the 2015 Paris Agreement to support their efforts to accelerate their energy transitions through the enhancement and implementation of their NDCs. These countries cover a total population of around 1.8 billion people with a carbon footprint of 3.2 billion tonnes of carbon dioxide equivalent.

The high-level event Driving NDC Implementation Through Collaborative Action, organised by the NDC Partnership, presented the alignment of major member initiatives with the Partnership, and the supportive role of the newly launched Partnership Action Fund (PAF) in providing supplementary resources to members. The Director General described IRENA’s work supporting countries in enhancing the energy components of their NDCs.

In the event, Raising Climate Ambition in The Gambia – Best Practices and Lessons Learned, organised by IRENA, partners showcased the work and collaborative efforts undertaken to enhance The Gambia’s NDC, which was deemed “1.5° compatible.” Representatives from the government (MECCNAR), NDCP and implementing partners (IRENA, ICLEI, UNDP) presented the work undertaken to inform the NDC update and discussed how this work can benefit and guide the implementation of the NDC.

IRENA also participated in the Launch of St. Kitts and Nevis Revised NDC and Implementation Plan showcasing the country’s updated NDC which sees the adoption of a 100 percent renewable energy target, improvements in electricity transmission and distribution, as well as the introduction of electric vehicles and associated infrastructure. 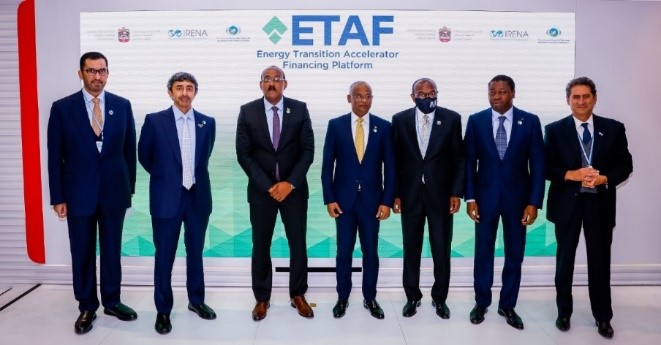 IRENA, together with the United Arab Emirates announced the Energy Transition Accelerator Financing (ETAF) Platform on 3 November. The ETAF Platform will mobilize financing towards 1.5 gigawatts of renewable energy projects in developing countries, with the Abu Dhabi Fund for Development (ADFD) joining as the Platform's first partner and providing an anchor contribution of 400 million USD. The partnership builds on the long-standing cooperation between IRENA and ADFD, whose previous joint facility provided 350 million USD towards funding 26 renewable energy projects in developing countries.

After the signing of an MoU between IRENA and AOSIS, the event Climate Emergency Finance for SIDS Energy Transformation to stay 1.5°C Alive brought together SIDS and key stakeholders to discuss concrete solutions, in particular climate finance and support for SIDS energy transformation policies and implementation, including the SIDS’ energy transitions towards a 1.5°C World.

The Critical Link between Energy and Health 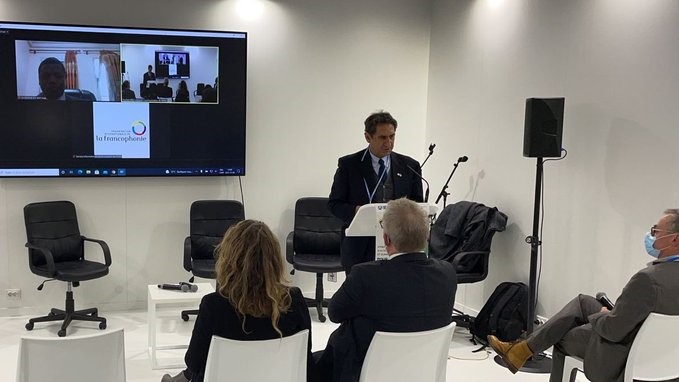 An event on the Electrification of Rural Healthcare in Sub-Saharan Africa through Decentralized Renewables, co-organised by IRENA, the Walloon Government of Belgium, and the World Health Organization, showcased the opportunity that decentralized renewable energy solutions present to providing reliable, cost-effective, and modular electricity services to rural health centers without access to reliable energy supply. The Director General spoke to the Agency’s work in this area, complemented by the Governments of Burkina Faso and Mali, as partners in this project

The COP26 Global Conference on Health and Climate Change brought together a wide range of key actors in public health and climate change policy in order to incorporate public health and climate justice considerations in the UN climate negotiations, and calling for a healthy, green and resilient COVID-19 recovery. IRENA highlighted the critical role for renewables in this context. 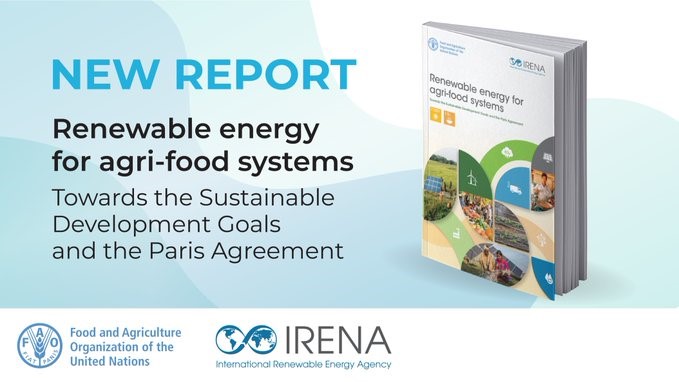 IRENA and FAO signed a Memorandum of Understanding to strengthen their collaboration regarding the deployment of renewable energy in agri-food, fisheries and forestry chains, and sustainable bioenergy. As a concrete output of this collaboration, the organisations presented a joint report at a virtual event at COP: Renewable Energy for Agri-food Systems: Towards Sustainable Development and the Paris Agreement.

Canada, Mexico and the United States, working together under the Environmental Cooperation Agreement, launched a North American initiative to support isolated and remote communities transition to clean, renewable and reliable sources of energy. At the launch of this initiative, the Director General spoke to how concerted global action is necessary to accelerate deployment of renewable energy and thus ensure a just, resilient, and prosperous transition for all communities.

At #COP26, we announced $500,000 for a new partnership with @IRENA to support the transition of remote communities to #RenewableEnergy. @CECweb @IndigClnEnergy

As COP26 ended, IRENA was already looking ahead to the next major event on the energy calendar. The twelfth IRENA Assembly will be held in Abu Dhabi 15-16 January 2022. We hope to see you there, in person or online.