The world’s most comprehensive, up-to-date and accessible figures on renewable energy capacity have just been released by IRENA.

Renewable Energy Capacity Statistics 2015, which includes figures from 2000 to 2014, contains 12,000 data points from more than 200 countries and territories. While capacity data is readily available for larger markets like China and Germany, information for smaller markets like Small Island Developing States (SIDS) can be more difficult to find.

Data reveals that global renewable energy capacity has increased 120% since 2000. While SIDS were not able to keep pace with this growth rate, the data indicates they did use a more diversified mix of renewable energy than other countries, including hydropower, bagasse, solar and wind power. Among SIDS themselves, notable trends include the rise of wind power in the Caribbean and a broader range of renewable energy developments in solar, wind and geothermal energy for Pacific SIDS.

Another impressive trend is the growth in biogas, which was present in only 26 countries in 2000 and has now reached 63 countries worldwide.

See a slide deck overview of the data.

The full data set is continually updated in the "Data and Statistics" section of IRENA’s knowledge portal, REsource. Through this portal, users can compare countries and create and download their own data selections as charts, graphs or spreadsheet tables. It is also available for PDF download. 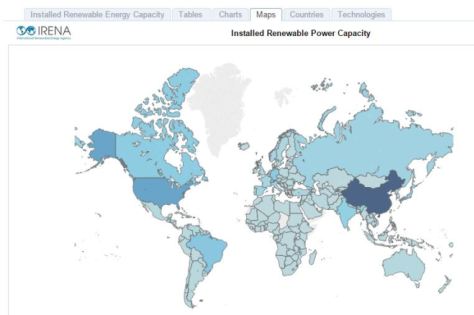 The renewable power capacity data shown represents the maximum net generating capacity of power plants and other installations that use renewable energy sources to produce electricity. For most countries and technologies, the data reflects the capacity installed and connected at the end of the calendar year. Data has been obtained from a variety of sources, including an IRENA questionnaire, official national statistics, industry association reports, consultant reports and news articles.