Abu Dhabi, United Arab Emirates, 14 January 2017 — Government officials from more than 150 countries and leaders from international organisations, the private sector and civil society are gathering today and tomorrow in Abu Dhabi for the Seventh Assembly of the International Renewable Energy Agency (IRENA) to chart a pathway to a sustainable energy future. The Assembly, the Agency’s ultimate decision-making authority, brings together the international community to advance the global renewable energy agenda and make concrete steps to accelerate the global energy transition and a decarbonisation of the global energy mix.

“An unprecedented transformation of our energy system is underway. Plummeting costs and rapid innovation have spurred investments that are positioning renewable energy solutions at the centre of energy discussion today,” said IRENA Director-General Adnan Z. Amin. “It is no longer a question of whether or if, but of how we can accelerate this change to move towards a global, sustainable and affordable low-carbon energy future.”

Taking place 14-15 January at the St. Regis Saadiyat Hotel in Abu Dhabi, following a day of preliminary meetings and discussions on 13 January, including the second IRENA Legislator’s Forum, the Seventh Assembly will focus on IRENA’s strategic and programmatic direction to support countries accelerate deployment of renewable energy, and in doing so, meet climate goals, boost the economy, and increase energy access and security.

Highlights of this year’s Assembly include: two ministerial roundtables covering innovation in the power sector and catalysing off-grid renewable energy deployment for development; programmatic discussions on scaling-up private sector renewable energy uptake and driving energy sector decarbonisation through innovation; the announcement of projects in developing countries receiving loans worth USD 44.5 million under the fourth round of the IRENA/Abu Dhabi Fund for Development Project Facility.

The Assembly will also feature the launch of ‘REthinking Energy 2017’ which examines the latest trends in renewable energy and the dramatic changes in the energy sector in many countries.

“The speed and scale of the energy transformation calls for, more than any time before, a strengthening of global cooperation, through concrete action and initiatives to seize its opportunities and grapple with the multiple changes and challenges ahead,” added Mr. Amin. “IRENA’s Assembly is the meeting point for such international cooperation, and the next two days will address a range of issues central to the energy transformation underway.”

The Assembly also marks the opening of Abu Dhabi Sustainability Week and preceeds the World Future Energy Summit (WFES), a global gathering of of energy leaders and decision makers. Throughout the week, IRENA will host and will participate in a series of events, covering topics ranging from the decarbonisation of energy systems to the scaling up of variable renewable power.

High resolution photos from the event are available for download at: http://bit.ly/2jamEVA

Over 1,000 delegates from 150 countries attend the opening of IRENA's Seventh Assembly. 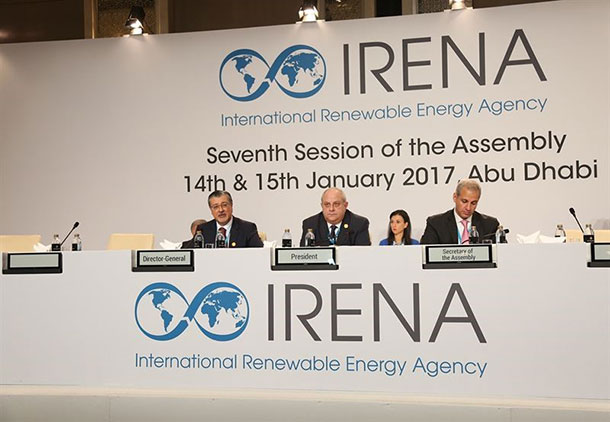 From left to right: Adnan Z. Amin, Director-General of IRENA; Mario Giro, Deputy-Minister of Foreign Affairs and International Cooperation of Italy, President of the Assembly; Mohamed El-Farnawany, Director of Strategic Management and Executive Direction of IRENA, Secretary of the Assembly.

IRENA is mandated to be the global hub for renewable energy cooperation and information exchange by 150 Members (149 States and the European Union). Roughly 27 additional countries are in the accession process and actively engaged. IRENA promotes the widespread adoption and sustainable use of all forms of renewable energy, in the pursuit of sustainable development, energy access, energy security and low-carbon economic growth and prosperity. www.irena.org