Cities contribute around 80% of global GDP, significantly improving society’s overall well-being. But they are also responsible for more than two-thirds of global energy use and three-quarters of anthropogenic carbon emissions. Cities are therefore increasingly relevant to climate change mitigation and adaptation.

With the adoption of the 2015 Paris Agreement, more and more cities have committed to developing forward-looking, climate-friendly and resilient action plans and investment decisions for the future. Renewable-based solutions hold great potential to reduce carbon emissions from urban energy systems and end uses, such as the buildings, transport and industrial sectors, through sector-coupling strategies and approaches.

The potential to substitute fossil fuels in end-use sectors, including buildings, district heating and cooling, and transport, are significant and account for the lion’s share of potential emission reductions. In addition to energy supply (e.g. rooftop solar PV and solar thermal) and end-use technologies (e.g. heat pumps), urban-level energy planning and decision-making are also critical to put climate-resilient urban infrastructure in place, and to ensure the success of global energy transitions.

In a variety of roles, cities are uniquely positioned to turn global pledges into actionable programmes by creating the right policy and regulatory frameworks. In a set of reports and briefs on Renewable Energy Policies for Cities, IRENA analyses this multitude of roles that cities already play in accelerating the energy transition at the local level. A series of short case studies of cities around the world showcases the implementation of different renewable energy and enabling technologies, including solar energy, direct use of geothermal resources, bioenergy and waste-to-energy options, as well as thermal energy storage and electric mobility. They address the motivations and objectives that compel cities to act, the variety of drivers that either enable or constrain cities’ actions and thus influence what they can do, and the urban energy system planning and policy tools they can apply.

The Rise of Renewables in Cities report highlights resource potential, targets, technology options and system-planning priorities for cities around the world. Past analysis explores the potential for urban communities to scale up renewables by 2030, based on estimated energy use in 3 649 cities around the world. It finds that every city has massive potential to cost-effectively boost renewable energy use at the local level.

IRENA, in collaboration with ICLEI (International Council for Local Environmental Initiatives) and GIZ (the German Agency for International Cooperation), has published a report on Scaling Up Renewables in Cities, which reviews crucial aspects of the urban energy transition. Back in 2013, in collaboration with the ICLEI, IRENA also produced a series of case studies on cities where local governments have successfully adopted measures to promote renewable energy and sustainability.

Heating and cooling includes a wide range of end-use applications and technologies. In the buildings sector it includes cooking, water heating, space heating, ambient cooling and refrigeration. In addition, in industry it also includes process heating — from low-temperature applications (e.g. in the food industry) to high-temperature applications (e.g. in the cement, iron and steel industries) – and process steam. Heating and cooling for residential, commercial and industrial purposes accounts for a large share of total final energy demand. For example, in the European Union heating and cooling in buildings and industry accounts for half of energy consumption (estimate by the European Commission).

A range of options are available to decarbonise heating and cooling, including district heating and cooling with high shares of renewables (systems based on the centralised heating or cooling of water that is then distributed to multiple buildings through a pipe network), solar thermal heat, sustainable bioenergy, geothermal heat and heat pumps. IRENA’s World Energy Technology Outlook contains more details on the potential of these technologies.

In addition to increased use of renewable energy, energy efficiency measures can contribute to more sustainable energy use by reducing the demand for heating and cooling. In buildings, efficiency measures include advanced construction and design techniques, enhanced insulation and better information and control of energy use with intelligent thermostats. In industry, energy for heating and cooling can be saved with energy-efficient technologies such as combined heat and power units, and via energy management solutions and technologies. Sector coupling can allow surplus electricity to provide heating and cooling for buildings and industry.

*Japan includes heating and cooling.
No centralised cooling systems are in operation in Kuwait.
Key Message: IHC uses a wide variety of generation sources across countries. In most countries, the share of renewable resources is modest. 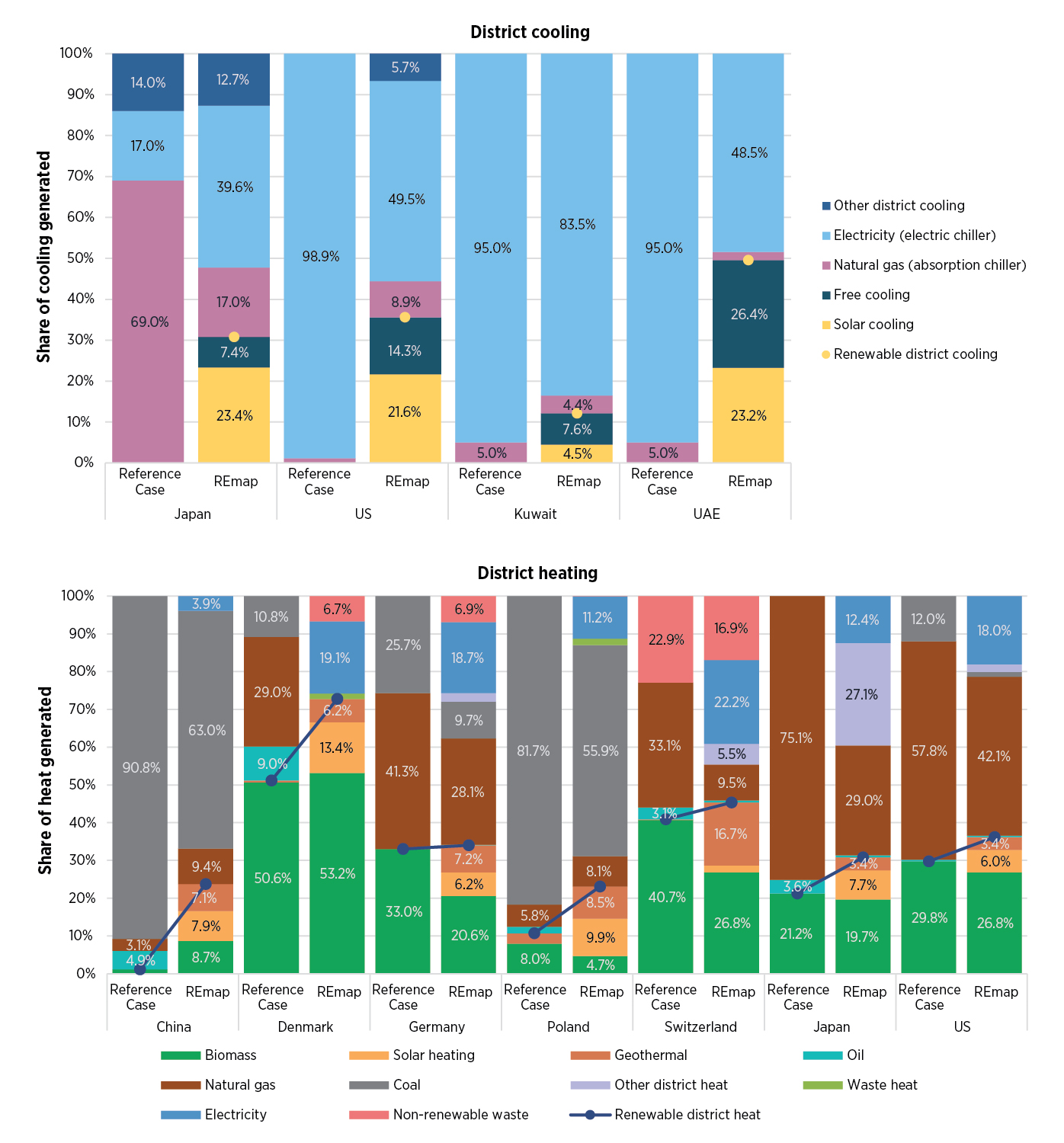 Based on IRENA estimates
Key Message: There is additional potential for the various renewable energy technologies, in both the heating and the cooling segments. Realizing this potential would increase the share of renewable energy in DHC in all countries assessed by IRENA.

Breakdown of fuel use in DHC systems worldwide, 2014. 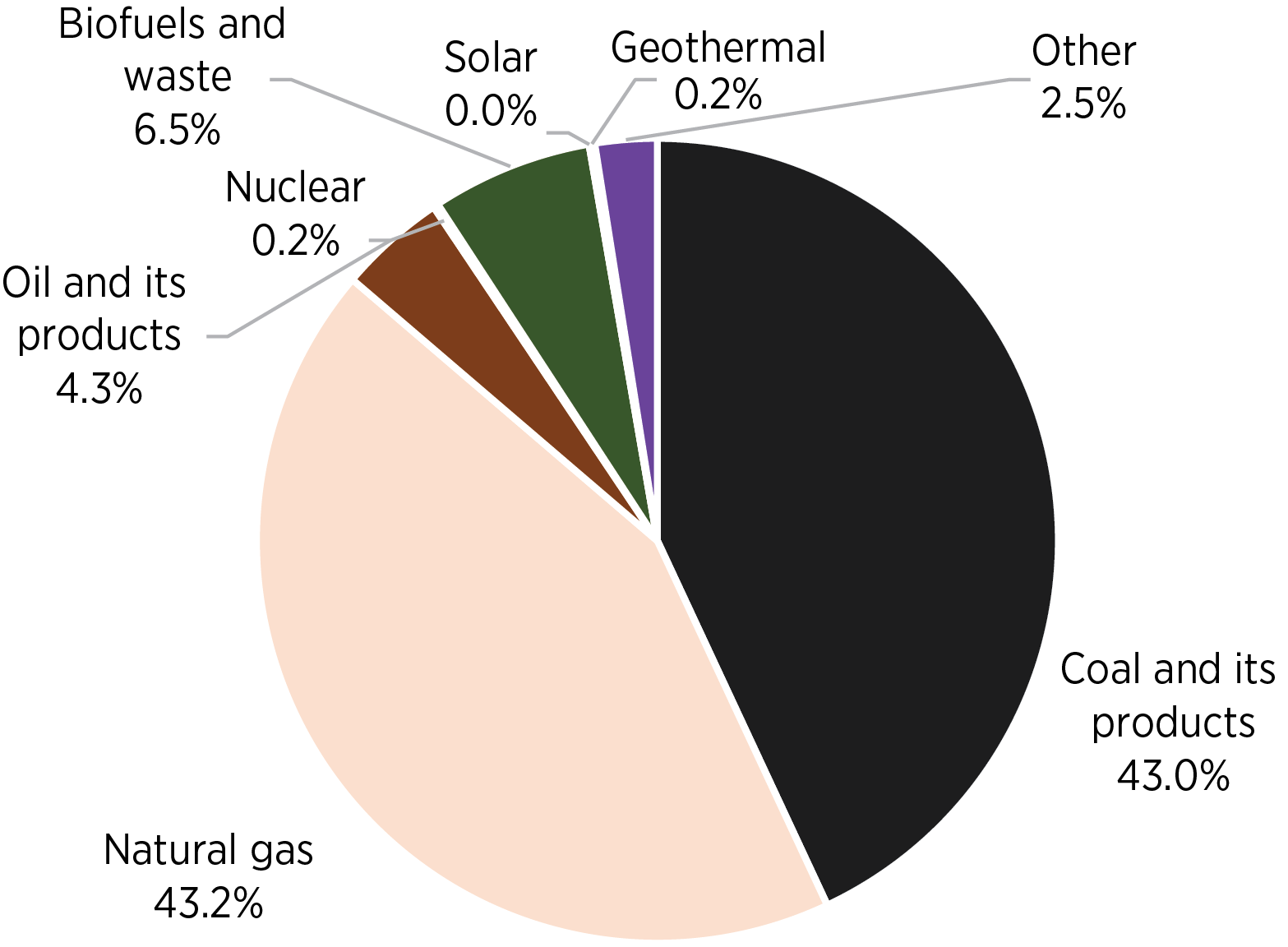 Key Message: Most DHC energy is currently provided by fossil fuels, while renewables account for only a minor proportion of the energy used in DHC systems.
FOCUS ON

This report outlines a pathway for the world to achieve the Paris Agreement goals and halt the pace of climate change by transforming the global energy landscape.