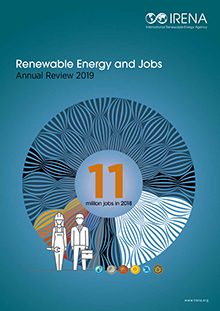 The widespread adoption of renewable energy technologies creates employment opportunities up and down the supply chain. Worldwide, the sector employed 11 million people at the end of 2018, according to this sixth edition of the Renewable Energy and Jobs series.

More countries were manufacturing, trading and installing renewable energy technologies. While leading markets like China, the United States and the European Union hosted the greatest concentration of jobs in renewables, other Asian countries have emerged as exporters of solar photovoltaic (PV) panels, the report notes.

While China edged ahead of Europe in offshore wind investment in 2018, the US and North African markets have also begun converting oil and gas experience into offshore wind jobs. Off-grid renewables – along with expanding electricity access – have contributed to job creation across Africa and Asia.

Employment opportunities are a key consideration in planning for low-carbon economic growth. Many governments have prioritised renewable energy development, firstly to reduce emissions and meet international climate goals, but also in pursuit of broader socio-economic benefits.