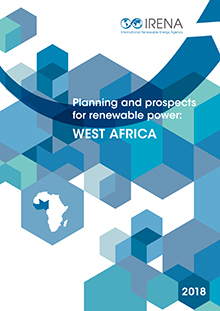 While regional co-ordination is crucial to boost cross-border transmission and achieve the optimal power mix, national targets could add the largest shares of new capacity for renewable power generation.

The report highlights the importance of a regular and well-informed process to continually update targets at all levels. The region faces daunting energy security and access challenges. Yet West African countries have increasingly harmonised their various plans and policies to take advantage of the region’s vast renewable energy potential, with the Economic Community of West African States (ECOWAS) providing a key co-ordination framework.

This report from the International Renewable Energy Agency (IRENA), while building on earlier assessments, takes account of the latest developments in region’s dynamic power sector. IRENA performed its first assessment of the prospects for renewable power development in continental ECOWAS countries in 2013. Based on an updated application of IRENA’s System Planning Test model for West Africa (SPLAT-W), the 2018 study finds that renewable power capacity could potentially reach levels near 65% of peak load across West Africa by 2030.

The updated report also draws upon the discussions and inputs at SPLAT-W training sessions held in Dakar, Senegal, in 2015 and 2016. The two sessions occurred as part of a six-month capacity development programme organised by IRENA and the ECOWAS Centre for Renewable Energy and Energy Efficiency (ECREEE), in collaboration with the International Atomic Energy Agency (IAEA) and the United Nations Framework Convention on Climate Change (UNFCCC).

The sessions were attended by experts from planning offices in ministries, electric utilities and specialised agencies from ten ECOWAS member countries. IRENA is grateful to those experts for permitting the use of their national models in this regional analysis.