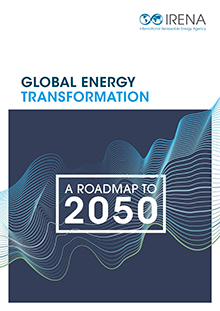 Renewable energy needs to be scaled up at least six times faster for the world to meet the decarbonisation and climate mitigation goals set out in the Paris Agreement, says Global Energy Transformation: A Roadmap to 2050.

The historic 2015 climate accord seeks, at minimum, to limit average global temperature rise to “well below 2°C” in the present century, compared to pre-industrial levels. As this 2018 report from the International Renewable Energy Agency (IRENA) shows, renewable energy and energy efficiency can, in combination, provide over 90% of the necessary energy-related CO2 emission reductions.

Furthermore, this can happen using technologies that are safe, reliable, affordable and widely available. While different paths can mitigate climate change, renewables and energy efficiency provide the optimal pathway to deliver most of the emission cuts needed at the necessary speed.

Actual carbon dioxide (CO2) emission trends are not yet on track.  Under current and planned policies, (including Nationally Determined Contributions under the Paris Agreement), the world would exhaust its energy-related carbon budget in less than 20 years. Even then, fossil fuels such as oil, natural gas and coal would continue to dominate the global energy mix for decades to come.

The “carbon budget” to keep global warming below 2o C will run out in under 20 years.

Keeping the global temperature rise below 2 degrees Celsius (°C) is technically feasible. It would also be more economically, socially and environmentally beneficial than the path resulting from current plans and policies, known in the report as the Reference Case. However, the global energy system must undergo a profound transformation, replacing the present system that is largely based on fossil-fuels.

The total share of renewable energy must rise from around 18% of total final energy consumption (in 2015) to around two-thirds by 2050. Over the same period, the share of renewables in the power sector would increase from around one-quarter to 85%, mostly through growth in solar and wind power generation. The energy intensity of the global economy will have to fall by about two-thirds, lowering energy demand in 2050 to slightly less than 2015 levels. This is achievable, despite significant population and economic growth, by substantially improving energy efficiency, the report finds.

Renewables could make up two-thirds of the energy mix by 2050, with significantly improved energy intensity. 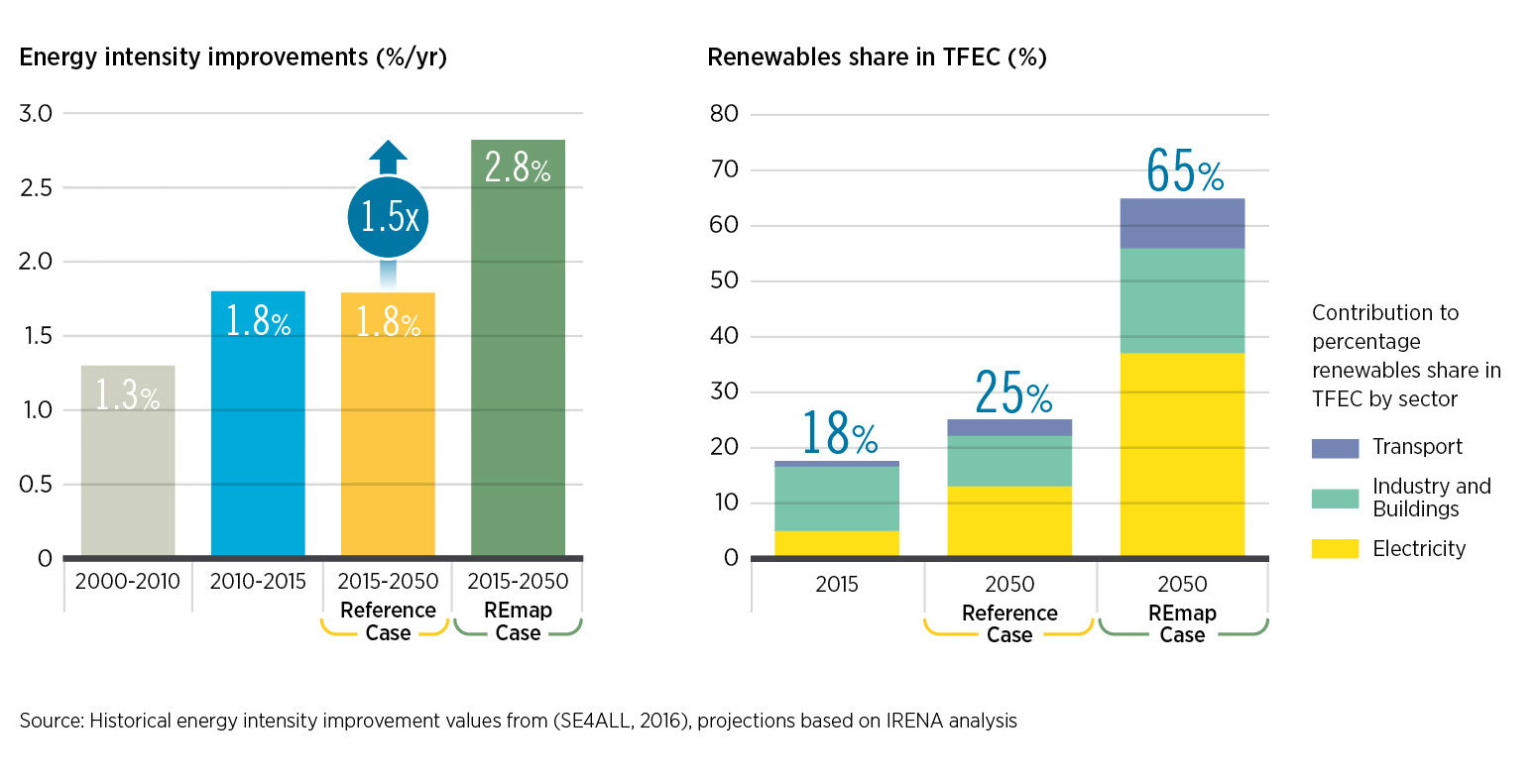 Although the power sector has already seen significant decarbonisation, that progress must be accelerated. As low-carbon electricity becomes the main energy carrier, the share of electricity consumed in the end-use sectors (buildings, heat and transport) would need to double, from approximately 20% in 2015 to 40% in 2050. Renewables must also expand significantly as a source for direct uses, including transport fuels and direct heat, the report adds. The analysis is based on IRENA’s global roadmap for scaling up renewables, known as REmap.

The global energy transformation makes economic sense. Yet it calls for more investment in low-carbon technologies without delay. Understanding its socioeconomic footprint, meanwhile, is essential. The shift to renewables should create more energy jobs than those lost in fossil-fuel industries, IRENA’s analysis shows. It would also boost global GDP by 1% in 2050 and significantly improve overall welfare.

The energy transition would generate over 11 million additional energy jobs by 2050. 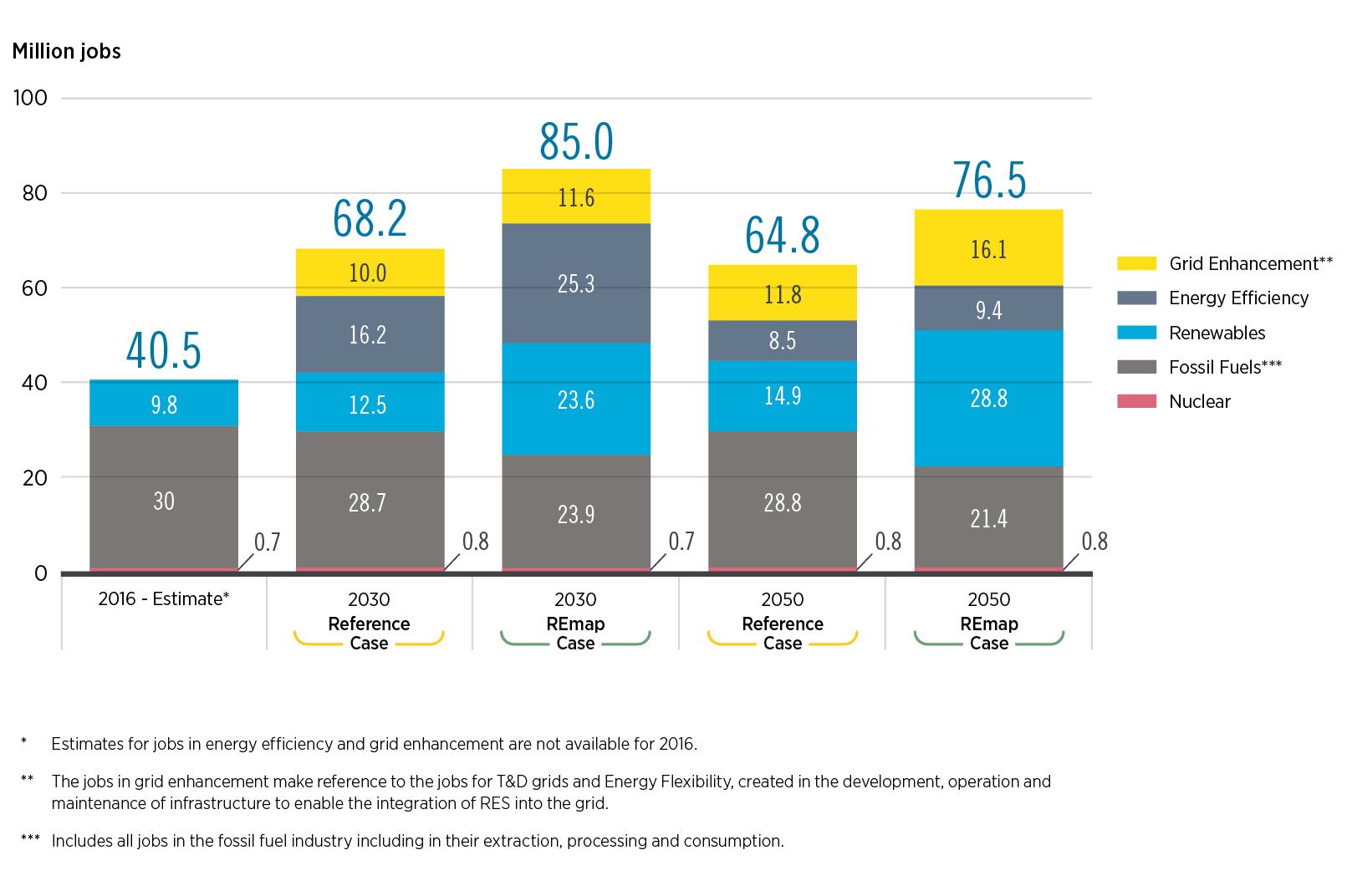 Yet the envisaged energy transformation cannot happen by itself. IRENA’s report identifies six focus areas where policy and decision makers need to act. To learn more, download> >Global Energy Transformation: A Roadmap to 2050.>

Key figures and findings are also presented in a general report slide deck.

The info-graphics below illustrate key indicators of the global energy transformation in end-use and power sectors: