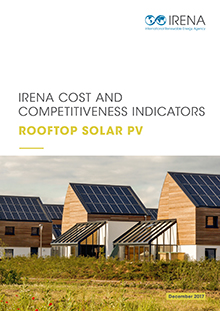 Solar photovoltaic (PV) power generation has grown rapidly, from less than 1 gigawatt (GW) in 2000 to about 300 GW worldwide in 2017. Solar PV’s competitiveness against other sources of electricity has also continued evolving.

To track these crucial market trends, the International Renewable Energy Agency (IRENA) has developed cost and competitiveness indicators for rooftop solar PV, based on the trends witnessed in key electricity markets. See the full report or the executive summary.

The indicators complement IRENA’s cost analysis, which helps to inform governments, policy makers, regulators and others on cost trends for utility-scale renewable power generation and other technologies worldwide.

In both Germany and the United States, falling technology costs have reduced the total installed costs for rooftop PV systems. This has resulted in rapid cost decreases for solar electricity.

The costs of electricity from residential rooftop solar PV have fallen especially rapidly. In four metropolitan areas in the state of California, for example, the LCOE for residential solar PV was seen to decrease 45% on average between 2010 (first quarter) and 2016 (second quarter).

Solar PV has become more affordable globally, with module prices declining over 80% in seven years, spurred by 44% annual average compound deployment growth. Between 2010 and 2016, the global weighted average total installed cost, including all hardware and balance-of-system components, fell by 65%. At the same time, the levelised cost of electricity (LCOE) for utility-scale solar PV projects fell by 67%.