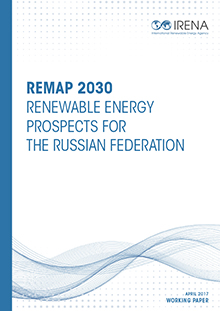 The Russian Federation has set out to increase and diversify its use of renewables, particularly for power generation. Under current plans and policies, renewables would reach nearly 5% of total final energy consumption by 2030. Accelerated deployment, however, could boost Russia’s renewable energy share to more than 11% in the same timeframe, according to this REmap working paper from the International Renewable Energy Agency (IRENA).

Yet certain areas require further attention. These include long-term planning, integration of renewables with existing plans, opening the way for solar PV and wind development, and ensuring reliable and affordable bioenergy supplies.

Hydropower – representing about a fifth of Russian power generation capacity – is currently the most prominent renewable source, along with bioenergy for heating in buildings and industry. By end of 2015, total installed renewable power generation capacity reached 53.5 gigawatts (GW) of which 51.5 GW came from hydropower, and the remainder 2 GW from bioenergy, wind, solar PV and geothermal.

Review the key findings in English and Russian (русский)

Find out more about REmap.