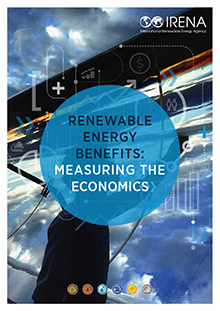 Using a macro-econometric approach, Renewable Energy Benefits: Measuring the Economics takes into account the linkages between the energy system and the world’s economies within a single quantitative framework. The analysis compares a business-as-usual case to two cases of advanced renewable energy deployment. The study shows that the impact of a transition to 36% renewables would benefit economic growth (GDP), welfare and employment in both cases.

Doubling the share of renewables in the energy mix by 2030 would increase global GDP by up to 1.1 per cent, improve welfare by up to 3.7 per cent and support over 24 million jobs in the sector.