Abu Dhabi, U.A.E., 22 Sept. 2016 – The business case for solar photovoltaics (PV) in Africa is stronger than ever thanks to rapidly declining technology costs, according to a new report released today by the International Renewable Energy Agency (IRENA). Solar PV in Africa: Costs and Markets, estimates that installed costs for power generated by utility-scale solar PV projects in Africa have decreased as much as 61 per cent since 2012. Today, installed costs for these projects are as low as USD 1.30 per watt in Africa, compared to the global average of USD 1.80 per watt.

“In recent years, solar PV costs have dropped dramatically and will continue to do so with further declines of up to 59 per cent possible in the next ten years,” said IRENA Director-General Adnan Z. Amin. “These cost reductions, coupled with vast solar potential on the continent, present a huge opportunity for Africa. Both grid-connected and off-grid solar PV now offer a cost-competitive means to meet rising energy needs and bring electricity to the 600 million Africans who currently lack access.”

Mini-grids utilising solar PV and off-grid solar home systems also provide higher quality energy services at the same or lower costs than the alternatives, finds the report. Stand-alone solar PV mini-grids have installed costs in Africa as low as USD 1.90 per watt for systems larger than 200 kW. Solar home systems – which have tripled in Africa between 2010 and 2014 – provide the annual electricity needs of off-grid households for as little as USD 56 per year, less than what they currently pay for poor quality energy services.

Global capacity additions for solar PV have increased six-fold since 2009, a trend that is now begining to materialise in Africa. More than 800 new megawatts (MW) of solar PV capacity was added in Africa in 2014 – doubling the continents cumulative capacity – and another 750 MW was added in 2015. IRENA estimates that with the right enabling policies, Africa could be home to more than 70 gigawatts of solar PV capacity by 2030.

“Africa’s solar potential is enormous, with solar irradiation levels up to 117 per cent higher than in Germany – the country with the highest installed solar power capacity,” said Mr. Amin. “It has never been more possible, and less expensive for Africa to realise this potential.”

Solar PV in Africa: Costs and Markets, provides an overview of the most comprehensive costing data available on solar PV in Africa. It reviews market opportunities and challenges. and recommends actions to collect more robust data for future analysis. 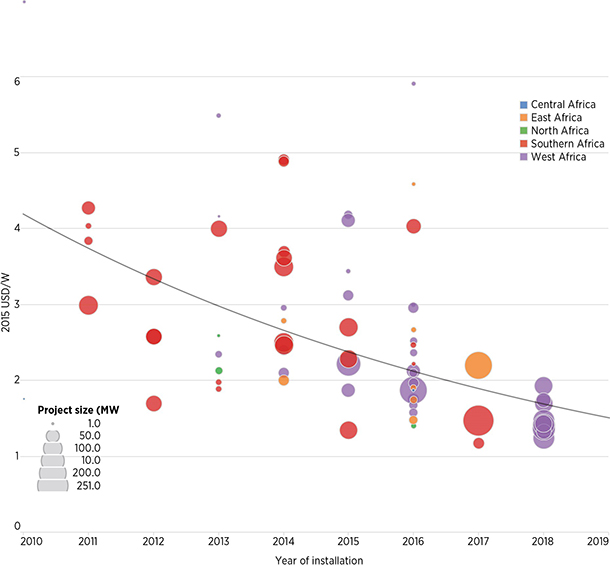 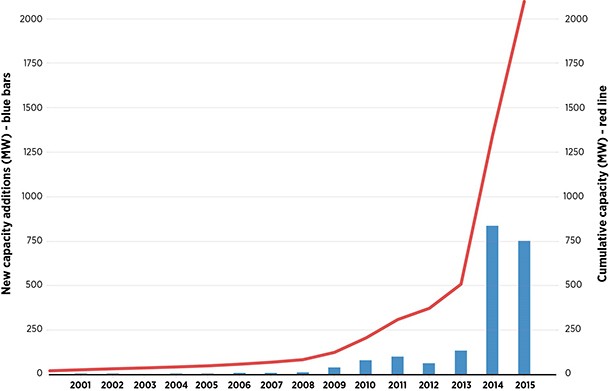 About the International Renewable Energy Agency (IRENA)
IRENA is mandated to be the global hub for renewable energy cooperation and information exchange by 149 Members (148 States and the European Union). Roughly 27 additional countries are in the accession process and actively engaged. IRENA promotes the widespread adoption and sustainable use of all forms of renewable energy, in the pursuit of sustainable development, energy access, energy security and low-carbon economic growth and prosperity. www.irena.org