“Egypt has a vast potential of largely untapped renewable energy resources” said Mr. Amin. “More importantly, its leadership is committed to scaling-up renewables to meet growing energy demand and a broad range of sustainable development challenges, and has taken concrete steps and initiatives in this direction,” he added.

President el-Sisi praised IRENA’s growing role in promoting the widespread use of renewables as the world seeks to transition to a sustainable energy future. “We look forward to strengthening cooperation with IRENA to accelerate renewable energy deployment, not only in Egypt but also in Africa, through initiatives such as the Africa Clean Energy Corridor and the Africa Renewable Energy Initiative,” he added.

Egypt aims to supply 20% of its generated electricity from renewable sources by 2022, installing 3.5 gigawatts (GW) of solar by 2027 and 7.2 GW of wind by 2020. To achieve these objectives, Egypt has several mechanisms in place, including a feed-in tariff system for solar PV and wind projects of less than 50 megawatts (MW), and a competitive bidding scheme for build-own-operate contracts.

These support schemes have yielded successful results in large-scale renewable energy generation, specifically with auctions achieving attractive prices, such as the 250-MW Gulf of El-Zeyt Wind Farm, which is producing power for just USD 0.04 per kilowatthour.

“With the right mix of policy support and private sector investment, Egypt can both power its growing economy with clean, affordable renewable energy, and also create an environment for a flourishing domestic renewable energy industry, particularly in the wind and solar sectors,” said Mr. Amin.

During his visit to Cairo, the Director-General also met with H.E. Mr. Mohamed Shaker El-Markabi, Minister of Electricity and Renewable Energy, and H.E. Mr. Sameh Shoukry, Minister of Foreign Affairs.

Egypt has been a Member of IRENA since July 2012 and has engaged with the Agency on several major initiatives including Renewables Readiness Assessment and REmap studies; the African Clean Energy Corridor and the Pan-Arab Clean Energy initiative. Egypt is also a member of the Global Geothermal Alliance. 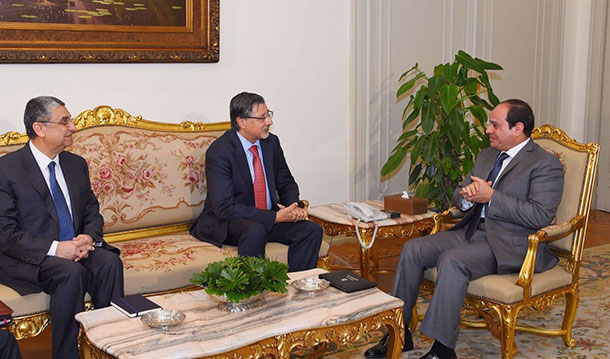 About the International Renewable Energy Agency (IRENA)
IRENA is mandated to be the global hub for renewable energy cooperation and information exchange by 150 Members (149 States and the European Union). Roughly 27 additional countries are in the accession process and actively engaged. IRENA promotes the widespread adoption and sustainable use of all forms of renewable energy, in the pursuit of sustainable development, energy access, energy security and low-carbon economic growth and prosperity. www.irena.org