The two discussed plans for COP21’s renewable energy day, as well as IRENA’s initiatives to expand renewable energy on islands (Lighthouse Initiative), in Africa (the Africa Clean Energy Corridor), and to speed the growth of geothermal energy worldwide (the Global Geothermal Alliance).

The Secretary-General expressed admiration for IRENA’s growth in its first five years, which is a testament to the world’s commitment to renewable energy. Since its foundation in 2009, the Agency’s membership has grown to 142 Member States and the European Union, with 29 more countries in the process of accession.

"The support of the United Nations and its leadership has been an important component of the rapid growth and success of IRENA to date,” said Mr. Amin. “We look forward to strengthening the partnership to support countries in their transition to a climate-safe, clean energy future." 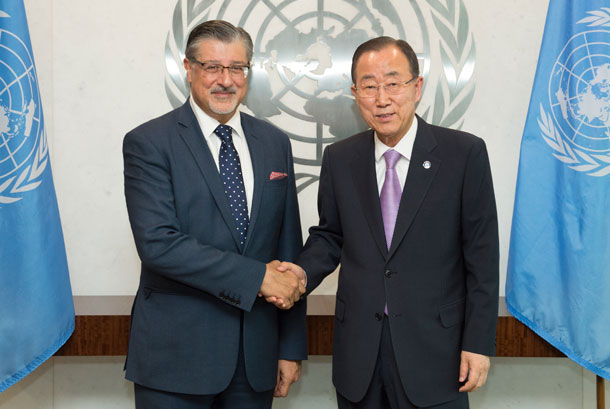 About the International Renewable Energy Agency (IRENA)
The International Renewable Energy Agency (IRENA) is mandated as the global hub for renewable energy cooperation and information exchange by 143 Members (142 States and the European Union). An additional 29 additional countries are in the accession process and actively engaged. IRENA promotes the widespread adoption and sustainable use of all forms of renewable energy, including bioenergy, geothermal, hydropower, ocean, solar and wind energy in the pursuit of sustainable development, energy access, energy security and low-carbon economic growth and prosperity. www.irena.org