The International Renewable Energy Agency held the 7th meeting of its Council in Abu Dhabi with a record number of country representatives. Delegates from 96 countries travelled to Abu Dhabi to discuss climate change, the socio-economic benefits of renewable energy, and ways to accelerate its deployment in developed economies. The Honorable Governor Deval Patrick of Massachusetts spoke at the opening of today’s meeting, stressing the important role renewable energy plays in his state’s economy and offering IRENA’s Members a partnership in addressing climate change. The Council, which was held June 2 and 3, also focuses on the Agency’s progress in its first biennial cycle of programming.

“Renewable energy, coupled with energy efficiency, is increasingly seen as a central element to finding solutions to the climate change challenge,” said IRENA Director-General Adnan Z. Amin. “Not only is securing a sustainable energy future the right choice to address the climate change challenge, it is the socially and economically beneficial choice.” 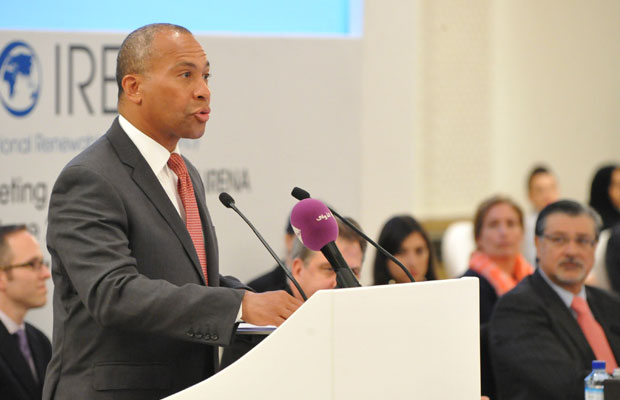 The most recent findings of the United Nations’ Intergovernmental Panel on Climate Change warns of significant, adverse consequences if action is not taken now. The report stressed that tripling or even quadrupling the share of renewable energy in the global energy mix by 2050 is a central part of the solution.

“Because we share IRENA’s vision, I look forward to exploring how we can partner with the Council at large and any of its members in particular,” said Governor Patrick. “Challenges as large as climate change demand collaboration and the sharing of lessons learned. When the stakes are this high, and the opportunities are this great, going it alone is not the wisest option,” he added.

“No country alone can address the challenges the world is facing in meeting the growing energy needs and lifting people out of poverty while tackling the existential threat that climate change poses to us all,” Mr. Amin said.  “That is why IRENA welcomes Governor Patrick’s offer for enhanced international cooperation, including the State level. Renewable energy is a central part of the solution and IRENA is providing a platform to accelerate and upscale deployment.”

IRENA’s Council is composed of 21 members elected on a rotational basis from the Agency’s growing membership. In just over three years, IRENA membership has doubled to 131 Members, reflecting a growing international interest in renewable energy and country commitments to engage in international cooperation on this subject matter.

About the International Renewable Energy Agency

The International Renewable Energy Agency is mandated as the global hub for renewable energy cooperation and information exchange by 131 Members (130 States and the European Union). About 40 additional countries are in the accession process and actively engaged. IRENA supports countries in their transition to a sustainable energy future, and serves as the principal platform for international cooperation, a centre of excellence, and a repository of policy, technology, resource and financial knowledge on renewable energy.  The Agency promotes the widespread adoption and sustainable use of all forms of renewable energy, including bioenergy, geothermal, hydropower, ocean, solar and wind energy in the pursuit of sustainable development, energy access, energy security and low-carbon economic growth and prosperity.