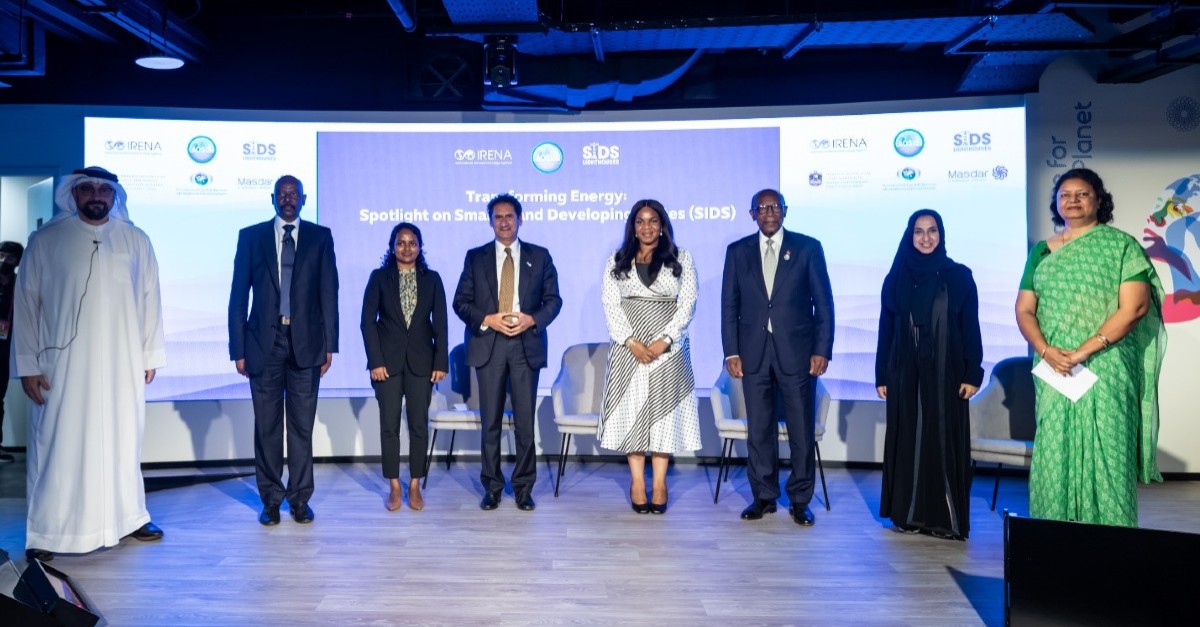 Under the theme "Connecting Minds, Creating the Future”, EXPO 2020 presents fertile ground for innovation, expression, and cooperation, the type of which is critical to identifying the solutions needed to address today’s multidimensional challenges.

Closing the finance and investment gap for the energy transition in Small Island Development States (SIDS) is one such challenge. The International Renewable Energy Agency (IRENA) and the Alliance of Small Island States (AOSIS), through the SIDS Lighthouses Initiative, have recently committed to supporting all SIDS achieve 10GW of total installed renewable energy capacity by 2030.

On October 5th, during Climate and Biodiversity Week at EXPO2020, IRENA brought together SIDS ministers, SEforALL, Masdar, the Abu Dhabi Fund for Development (ADFD), among others, under one roof to discuss the obstacles that the SIDS face in expediting access to predictable and affordable finance for energy transition and climate action. The result was a candid discussion that held with it the promise of concrete collaboration and action. When it comes to the impacts of global warming, SIDS, despite contributing the least to global carbon emissions, are amongst the most vulnerable.

Delivering his opening remarks, IRENA Director-General Francesco La Camera said the scale up of renewable energy in developing countries is key to achieving a net zero future by 2050. “Just 15 per cent of renewable energy investment between 2013 and 2018 was directed at developing and emerging economies,” said Mr. La Camera. “This imbalance must be addressed. I hope this inspiring backdrop stimulates not only discussion, but also action and progress.” 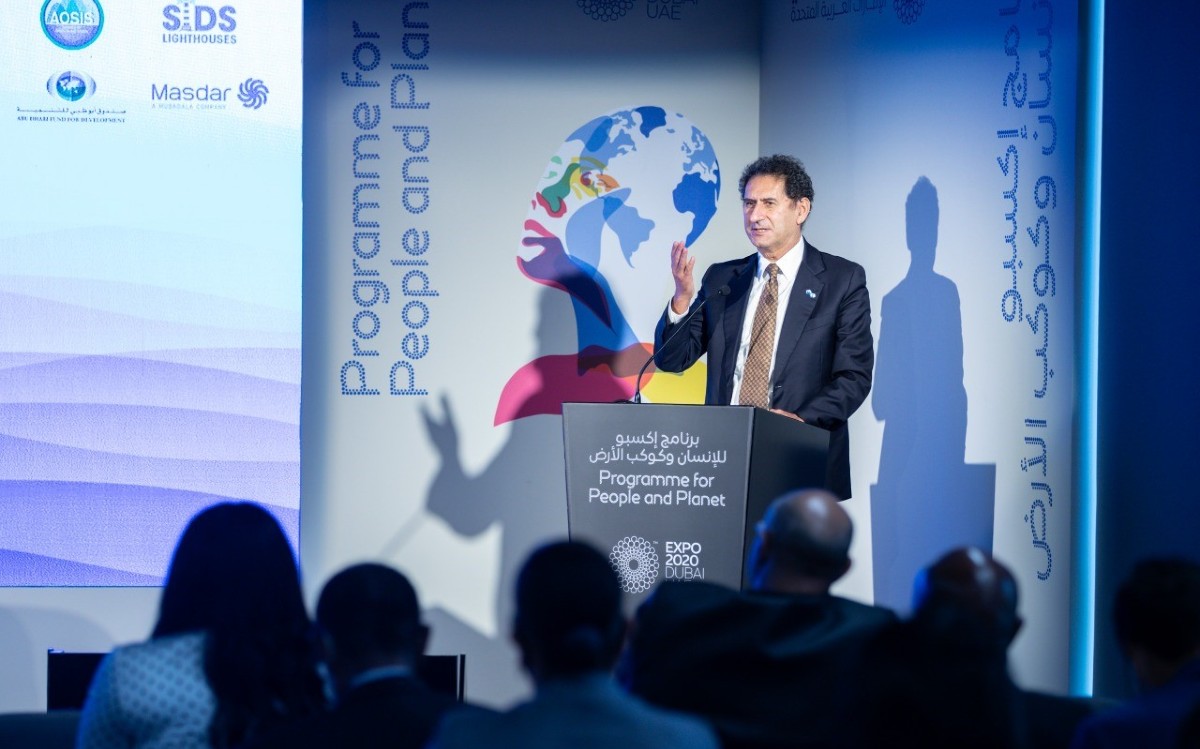 H.E. Abdulla Shahid, President of the United Nations General Assembly, and Minister of Foreign Affairs of the Republic of Maldives highlighted, during his remarks, the role of sustainable energy as an accelerator of sustainable development. IRENA’s socio-economic analysis shows that renewable energy is not only positive for the environment, but is also a cornerstone of socio-economic development, with a unique ability to bring affordable and resilient clean energy supplies to rural and urban communities alike.

Renewable energy capacity in SIDS grew to almost 6 GW in 2020. This is expected to almost double by 2030, according to H.E. Everly Paul Chet Greene, Chair of AOSIS, and Minister of Foreign Affairs, Trade and Immigration of Antigua and Barbuda, pointing to the recent pledge by 39 small islands under IRENA’s SIDS lighthouse initiative, which serves as the basis of the IRENA-AOSIS Energy Compact. “This will cost the SIDS USD 10 billion between now and 2030, according to analysis done by IRENA,” he said. “AOSIS can and will meet this target, and we will do so with the support of our partners.”

After hearing from the distinguished speakers, IRENA Deputy Director-General Ms. Gauri Singh, delivered opening remarks before moderating a diverse, high-level panel discussion that brought together Ministers, CEOs and international organisations to discuss the biggest challenges and opportunities that island states face in tackling climate change. “The international community needs to utilise “special lenses” to massively scale up its immediate and urgent financial support for energy transition and climate action in the state of climate emergency in SIDS, which has been reiterated more than ever by the scientific community,” she said. 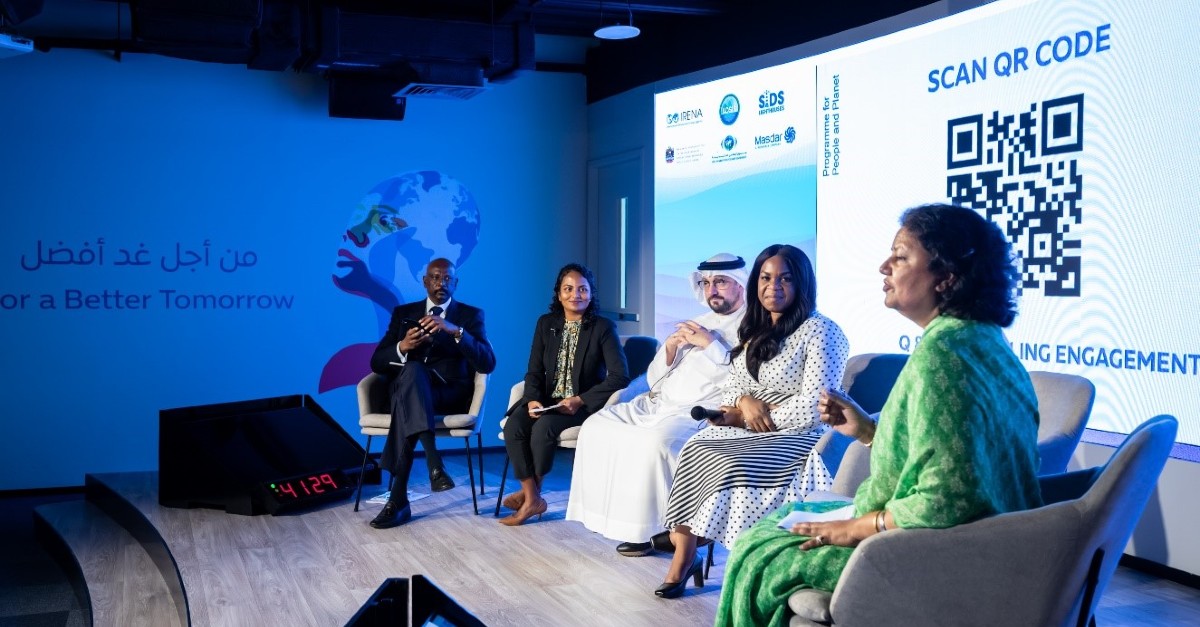 During the panel discussion, Her Excellency Aminath Shauna, Minister of Environment, Climate Change and Technology of Maldives highlighted the inspirational role that the Maldives is playing by taking ambitious steps to accelerate the energy transition: “If the Maldives can do it the rest of the world can do it. Our energy needs are enormous. It is in our interest to transition to an economy fueled by sunshine.”

Putting the leadership of SIDS on climate action on full display H.E. Molywyn Joseph, the Minister of Health, Wellness and the Environment of Antigua and Barbuda said: “we must be prepared to do what we are asking of others”, citing his country’s ambitious renewable energy targets of 90% of electricity from renewables by 2030. As a result of collaboration with IRENA, Antigua and Barbuda now powers almost all of its schools with renewable energy.

However, if SIDS are to match the ambitions set in their first round of NDC submissions in terms of installed renewable energy capacity, they will need to attract a total of USD 17 billion worth of investments by 2030, according to IRENA analyses. Ms. Damilola Ogunbiyi, the CEO of SEforALL, reminded everyone about the urgency of the task at hand: “Energy decisions made now need to support the opportunity agenda in these countries. They have the frameworks, but they need a clean energy option, and they need it now.”

Representing one of the biggest renewable energy developers in the world, the CEO of Masdar H.E. Mohamed Jameel Al Ramahi, highlighted Masdar’s focus on accelerating the energy transition, listing a lengthy portfolio of projects in developing countries and stressing on the company’s continued dedication and focus to work with international partners such as IRENA and local partners such as ADFD to bring bankable projects to life.

In closing, and in one of her first public appearances as the UAE’s Minister of Climate Change and Environment, H.E. Mariam Bint Mohammed Almheiri reinforced the UAE’s commitment to the deployment of renewables in small islands, citing this period as an opportunity for everyone to raise their ambitions. Two days later, on October 7th, the UAE did just that, announcing its Net Zero 2050 Strategic Initiative. The first of its kind in the region. 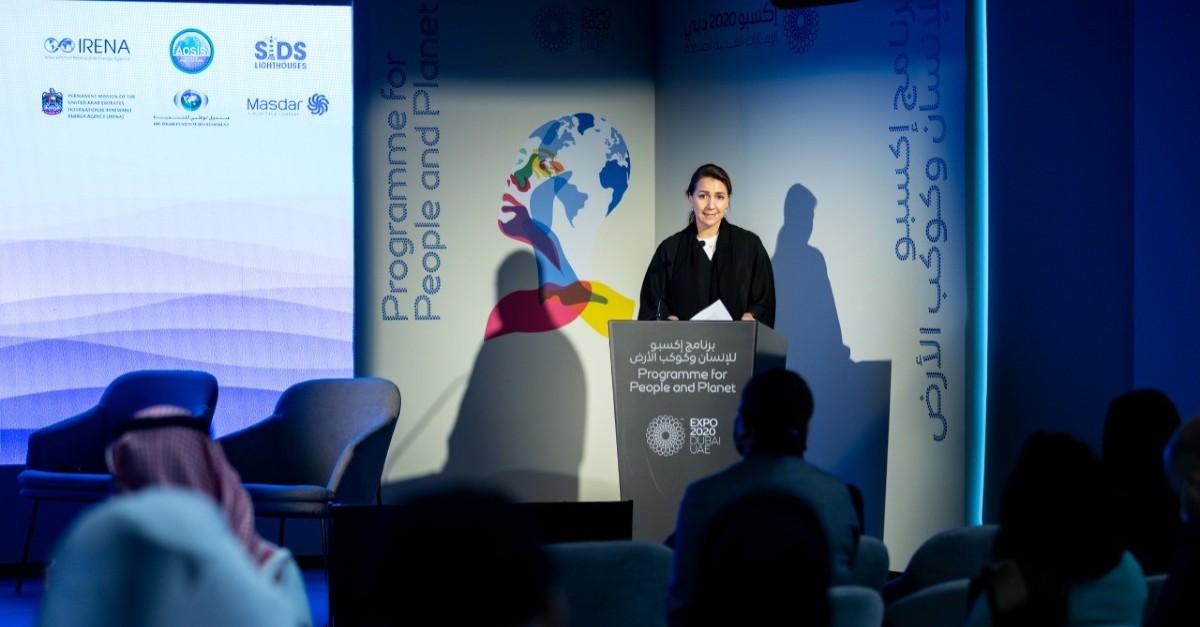 IRENA’s Director-General Francesco La Camera and Deputy Director-General Gauri Singh also brought the topic of renewable energy financing in developing countries to the forefront during Climate and Biodiversity week at multiple engagements at the German, Indian, Italian, Swedish and the Dubai Ports Pavilion. 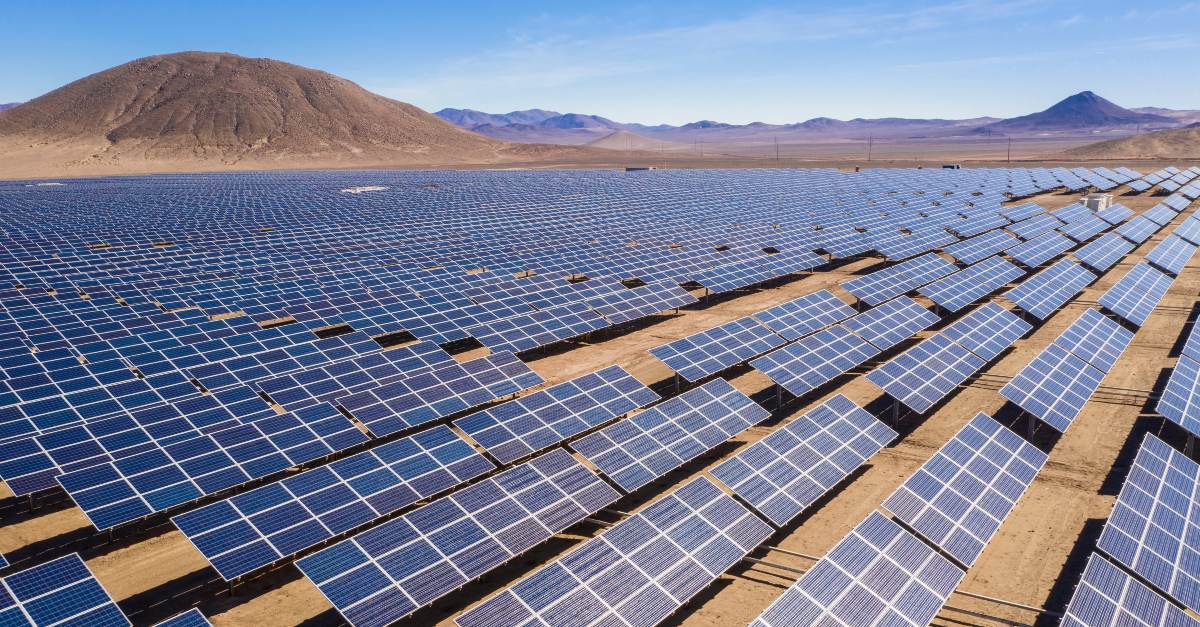 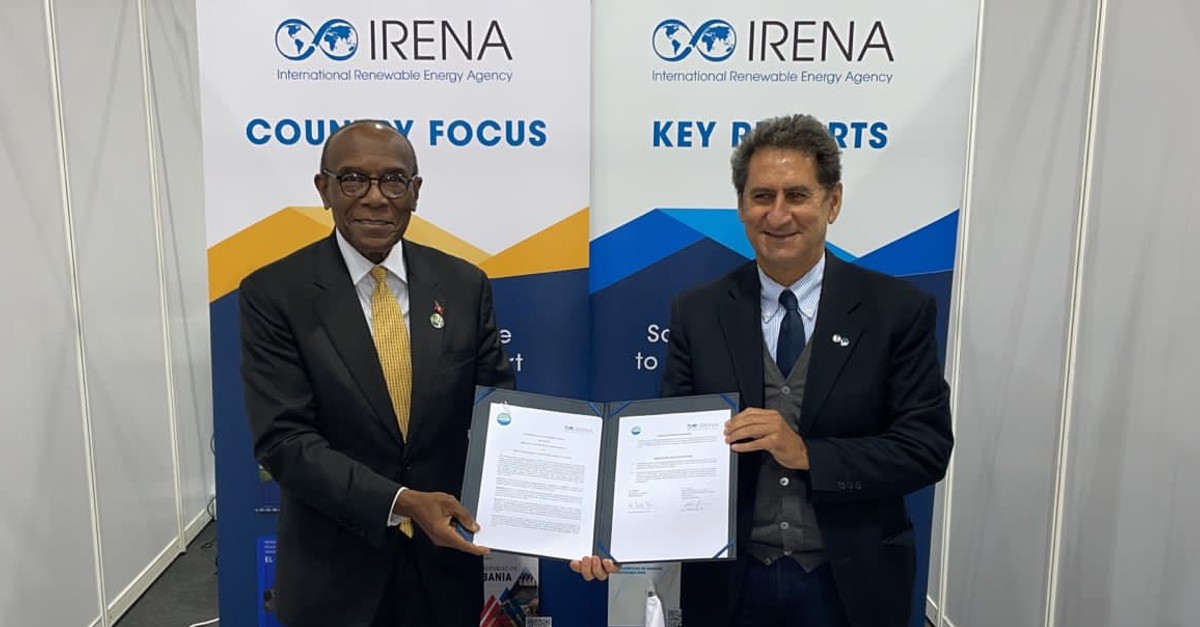 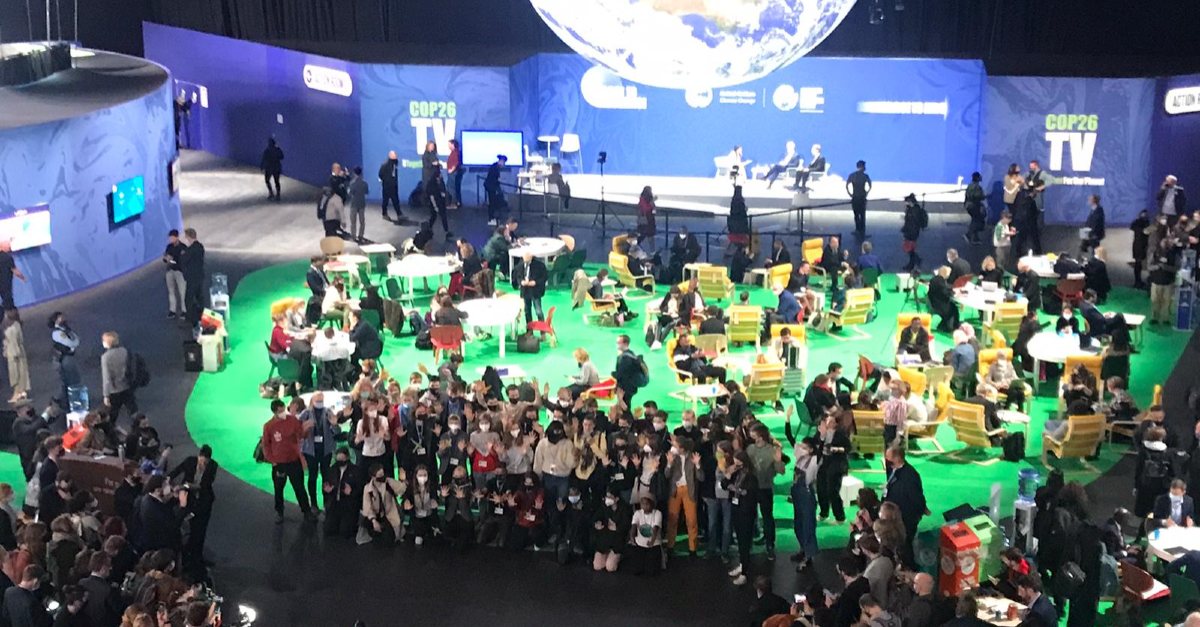 Disrupting the Status Quo: Accelerating the Global Energy Transition for a 1.5°C Future