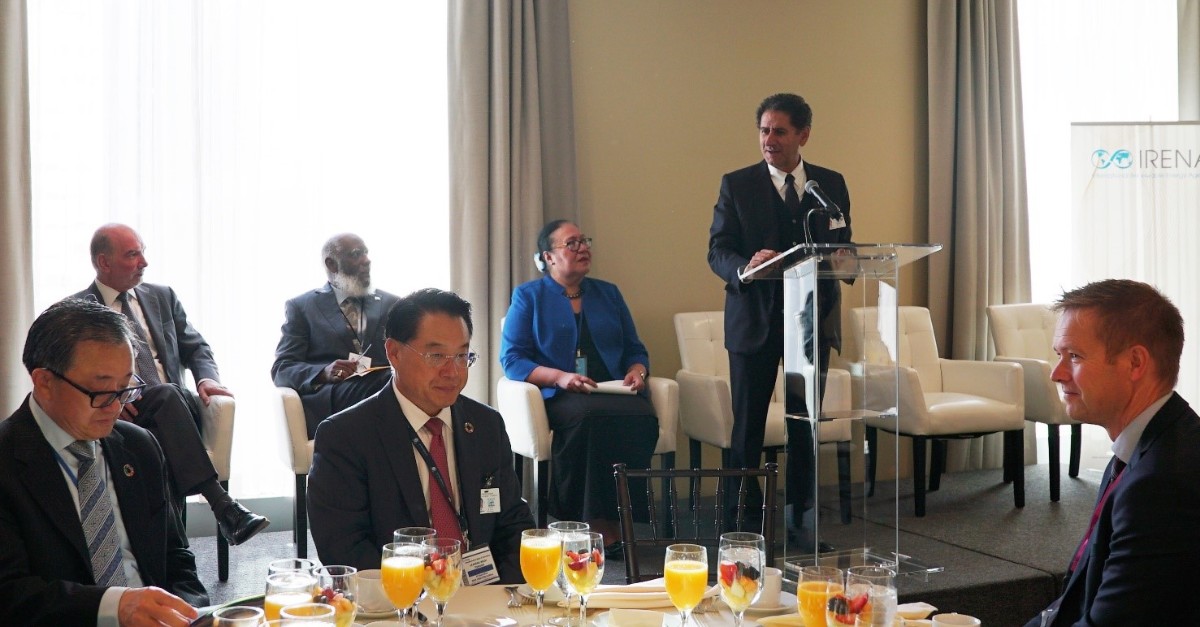 For small islands, climate change is already a reality. Rising sea levels and storms of increasing severity are not distant threats. For the 65 million people who call small islands home they are a present-day reality. In the face of tremendous adversity, however, small islands are fighting back. “Despite having contributed the least to climate change, SIDS remain the most vulnerable to its effects,” said IRENA Director-General Francesco La Camera. “Yet they show great leadership and resolve in pressing for urgent global action.”

This resilience was on show at the high-level breakfast meeting on SIDS, co-hosted by IRENA, Alliance of Small Island States (AOSIS), the State of Palau and the United Nations Office of the High Representative for the Least Developed Countries, Landlocked Developing Countries and the Small Island Developing States (UN-OHRLLS). The meeting gathered heads of state, ministers and leading civil society representatives from across geographies, to showcase ambition and advance collaborative efforts in pursuit of those goals.

“We are the ground zero of a global climate and biodiversity crisis,” said Wilfred Peter Elrington, Foreign Minister of Belize. “We cannot be silenced, when it is our citizens that are on the line.”

In response, islands are among the world’s most ambitious countries in terms of renewable energy adoption with a number of them pursuing 100 per cent renewable power generation targets, showing countries across the world what can be achieved through political will and collaborative effort. UN Secretary General Antonio Guterres congratulated small islands for their renewable energy ambition in his closing of the Climate Action Summit.

Seychelles is one country that has committed to the 100 per cent renewables goal. “We have cabinet approval for 100 per cent renewable energy, which will form part of our new and more ambitious NDC for submission next year,” declared Wallace Cosgrow, Minister of Environment, Energy and Climate for the Seychelles. “We are also looking at waste to energy systems which will help us manage our waste issues whilst taking advantage of the opportunity to harness electricity.”

Beyond the environmental benefits, there are also significant social and economic benefits for SIDS in pursuing high shares of renewable energy. A fact many of them have recognised and is motivating their decarbonisation agenda. “Renewables greatly contribute to sustainable socioeconomic well-being in SIDS,” highlighted Under Secretary General of the UNOHRLLS, Ms Fekitamoeloa ʻUtoikamanu. “Renewables have the potential to reach even the most remote islands – in doing so delivering positive returns to economies, health and social participation.” 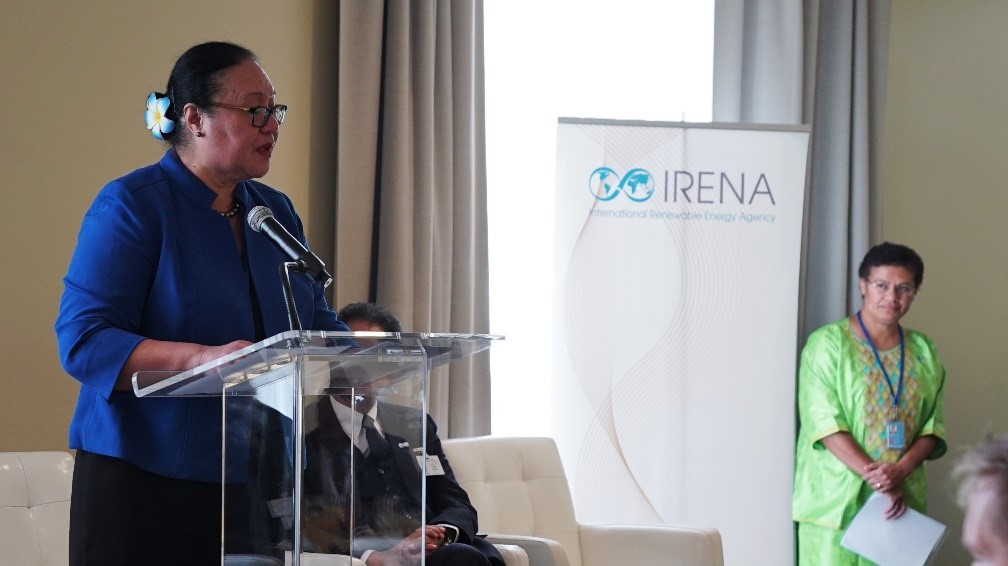 In the Maldives the benefits of transforming their energy system from one that is 94 per cent diesel power today to one that is dominated by renewable, are clear. Hussain Hassan, the country’s Minister of Environment highlighted that importing diesel for subsided power generation consumers up to 15 per cent of the country’s GDP. “The benefits for us are climate and economic,” he said.

Among the most advanced SIDS is the Cook Islands, who are “moving very quickly towards 100 per cent renewable energy” according to Deputy Prime Minister Mark Brown. Today, around 92 per cent of their energy needs are met by renewable sources, displacing expensive diesel to bring energy security and improve access.

The energized discussions sought to prepare delegates for the high-level review of progress made in addressing the priorities of SIDS through the implementation of the SAMOA Pathway. The review aims to result in a concise action oriented and inter-governmentally agreed political declaration. Luis Alfonso de Alba, the UN Secretary General’s Special Envoy for the Climate Action Summit offered words of encouragement as attendees prepared to enter SAMOA Pathway discussions. Further words of encouragement from the financial community left attendees with a sense of optimism. “We are hearing you,” said Acting World Bank CEO Axel Van Trotsenburg. “We are working with you. And we will continue to be part of this coalition to make a difference,” he concluded. 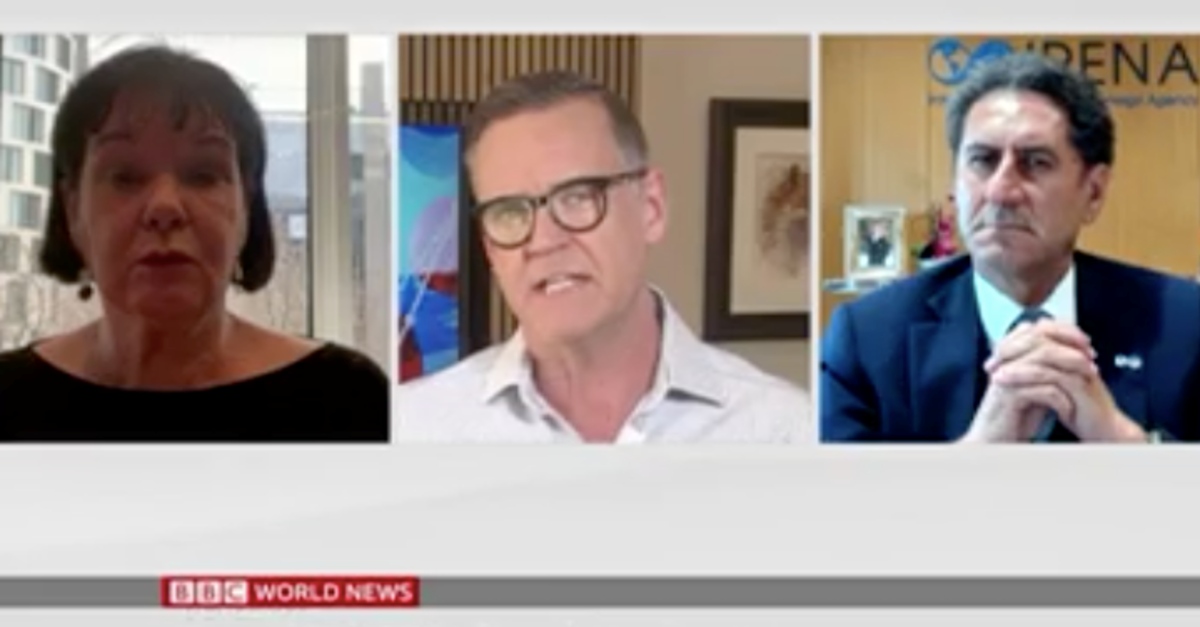