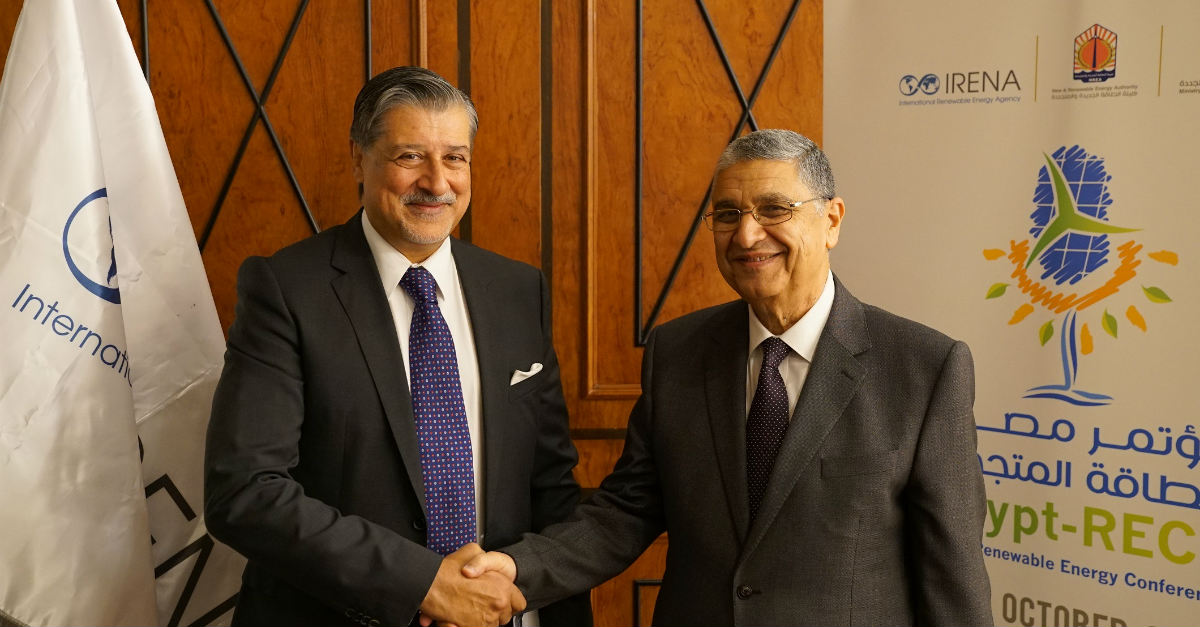 Cairo, Egypt, 9 October 2018 — Egypt has the potential to generate up to 53 per cent of its electricity from renewable sources by 2030, according to a new report by the International Renewable Energy Agency (IRENA). The Egypt Renewable Energy Outlook  report, released at a high-level conference in Cairo today in the presence of Egyptian government officials and regional decision makers, finds that pursuing higher shares of renewable energy could reduce the country’s energy bill by up to USD 900 million annually in 2030.

Renewables could cost-effectively provide up to a quarter of Egypt’s total final energy supply in 2030, per the analysis. Achieving the higher targets would, however, require investment in renewables to grow from USD 2.5 billion per year based on today’s policies to USD 6.5 billion per year. Under current plans, Egypt aims to source 20 per cent of its electricity from renewables by 2022, rising to 42 per cent by 2035. Total installed capacity of renewables in the country today amounts to 3.7 gigawatts (GW).

“This analysis offers the Egyptian energy sector a roadmap, building on current ambitions and plans, to enhance our position as an energy hub connecting Europe, Asia and Africa,” said H.E. Dr. Mohamed Shaker, Egyptian Minister of Electricity and Renewable Energy. “Job creation, economic development and the growth of local manufacturing capabilities are at the heart of our renewables programme, and with the support of IRENA we can pursue our plans to grow the country’s installed capacity base through smart policies, and the latest renewable technologies.”

Egypt can draw on an abundance of renewable energy resources to achieve higher shares of hydropower, wind, solar and biomass. To capitalise on this, the report suggests that national policy makers may benefit from periodically re-evaluating the long-term energy strategy to reflect rapid advances in renewable energy technology and falling renewable power generation costs.

“Remarkable cost reductions in renewable energy in recent years are encouraging governments all over the world to rethink energy strategies so as to better reflect the new economics of renewables,” said Mr. Adnan Z. Amin, IRENA Director-General.

“Egypt’s renewable energy potential is vast and the Government has now moved decisively to accelerate its deployment. The Benban solar complex with its impressive scale reflects this new momentum.”

“Building on these achievements, Egypt has the opportunity to further raise its ambition which entails substantially increased investments,” continued Mr. Amin. “Attracting these investments requires stable policy frameworks and a streamlined regulatory environment that provides clarity and certainty for investors. Investments in renewable energy not only help to meet rising energy demand but they can also contribute to fostering economic growth, creating employment and developing local manufacturing.”