Ambitious and targeted actions are needed now and throughout the coming decades to ensure the goals of energy access for all are fulfilled and a decarbonised energy system is achieved by 2050.

To accelerate action in line with the Sustainable Development Goals and the Paris Agreement on climate change, the United Nations have been mobilising voluntary multi-stakeholder commitments on energy, so called Energy Compacts. Nearly 760 million people around the world still lack access to electricity. And global temperatures are rising with the use of energy accounting for three-quarters of global emissions.

With more than 10 Energy Compacts submitted alone or with strong partners under the UN’s High-level Dialogue on Energy taking place from 22-24 September, IRENA is at the heart of mobilising global action. “We know that projects alone will not deliver transformation”, IRENA’s Director-General Francesco La Camera said during the high-level meeting in New York. “IRENA is therefore forming strong multi-stakeholder alliances with governments and private sector to accelerate action on energy transition.”

“Our compacts will shed light on technology pathways and investments in different regions of Africa, Europe and Latin America. They will detail the socio-economics footprint to help create industries and millions of jobs. And importantly, it will offer policy options for enabling frameworks, while ensuring a just and inclusive transition.”

In close cooperation with many partners, IRENA’s energy compacts cover a broad range of energy - from advancing green hydrogen, the food-energy-nexus and project facilitation to mobilising capital for energy projects. In partnership with the European Union, IRENA will provide technology pathways and investments clarity at regional level. Overview of IRENA compacts:

Energy Compacts are voluntary commitments from Member States and all other stakeholders, such as companies, regional/local governments, NGOs and others with the aim to advance progress on SDG7 and net-zero emissions. The global gathering in New York marked just the beginning of a decade-long process in support of the “Decade of Action”, showcasing the first set of ambitious Energy Compacts from across stakeholder groups. “IRENA is committed to leading this era of change, so that we can harness the power of modern markets and new technologies for a prosperous and resilient future for all”, La Camera concluded.

One of the major outcomes of the process of the UN’s High-level Dialogue on Energy Dialogue will be a forward-looking statement setting out a global roadmap for concrete actions needed to ensure access to energy for all and a climate-safe energy system. The global roadmap will be based on recommendations of five working groups. Together with UN ESCAP and UNEP, IRENA has been taken the lead in the working group that aims to accelerate energy transition. 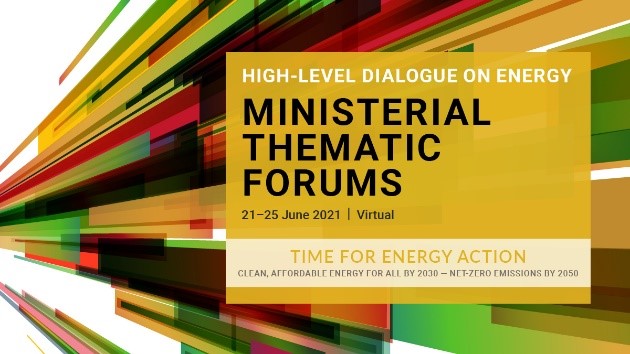 Under the working group, eleven concrete recommendations haven been put forward to global energy leaders on energy transition. Based on IRENA estimates, an almost tripling of renewable energy would enable the 2030 Agenda and provide a decisive shift towards a decarbonised system in 2050, reaching some 8000 GW of global renewable capacity by 2030 from today’s 2799 GW.