A renewable energy innovation has improved obstetric care to last-mile communities across Zimbabwe, successfully supporting over 180,000 deliveries per year since its introduction.

Tendai Matimbe starts his day at 7:30 am every morning, but as Nurse-in-Charge at the Kamabarami Health Clinic, Zimbabwe, he is never sure when it will end. Tendai’s patients include pregnant mothers, children, and HIV positive people in need of anti-retroviral therapy (ART). While he and his colleagues conduct consultations in the morning and outpatient visits until 4 pm, they are on standby 24/7 in case there is an emergency, or someone goes into labour.

Providing health services at night can be tricky. The facility lacks electricity and clinicians struggle in near darkness to provide lifesaving care to patients. According to Tendai: “At night, we faced many challenges because we relied on candles to conduct medical services. It was scary, especially during complications.”

Without a source of light, health workers faced issues such as difficulty in administering Nevirapine (a medication to reduce the likelihood of maternal HIV transmission) to newborn babies. Healthcare workers across the sub-Saharan Africa region face similar challenges every day. Medical facilities in Zimbabwe feature among the 70 per cent of facilities across the region without reliable access to electricity, according to a joint report by IRENA and other SDG 7 custodian organisations.

As a result, health workers like Tendai and his colleagues found themselves forced to ask pregnant women from the poor communities to bring extra money to buy enough candles to last through the night – something many could ill afford.

To combat this, We Care Solar, a non-profit organisation, started introducing the Solar Suitcase to health centres in Zimbabwe in 2015. It is an easy-to-use solar electric system that provides last-mile health facilities with highly efficient medical lighting and power for mobile communication and small medical devices.

“Night-time deliveries and emergencies were no longer fraught with candle-lit uncertainty.”

While the Suitcase was designed to support timely and efficient emergency obstetric care, it can be used in a range of humanitarian settings. The water-and-dust tight yellow case becomes a cabinet that mounts to the wall and is connected to the solar panels secured on the roof. The system includes rechargeable LED lights, USB ports, a fetal doppler, and an infrared thermometer. 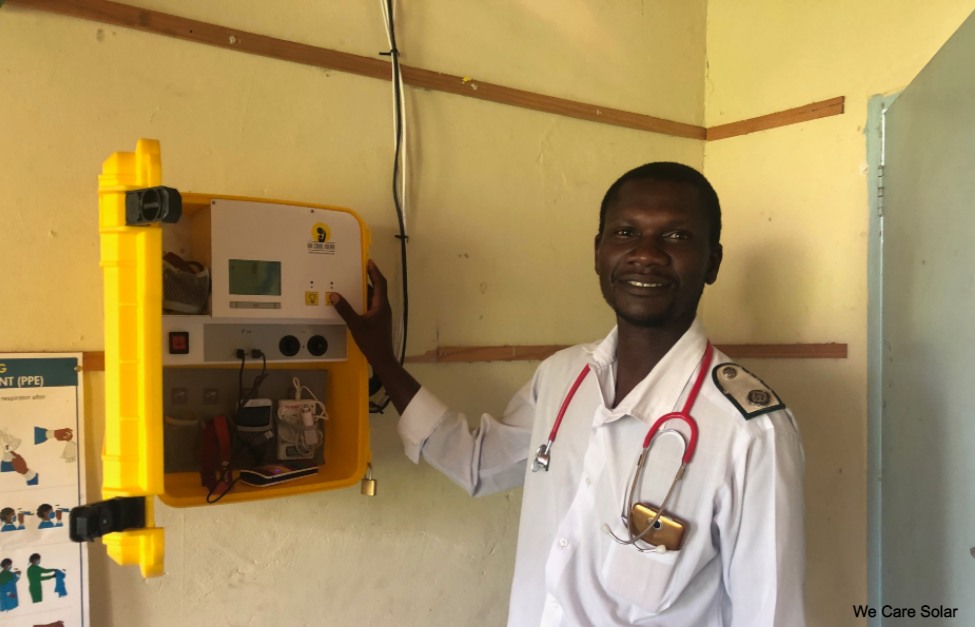 The Kamabarami Clinic received the suitcase in 2019. Overnight, Tendai and his team found their work transformed. The practical and portable source of clean, steady electricity ensured that night-time deliveries and emergencies were no longer fraught with candle-lit uncertainty. Tendai says: “Attending to patients has become easier now, even at night. With the fetal doppler, we can listen to the fetal heart rate easily. With the lights, we can detect fetal abnormalities on the baby, especially when there is birth asphyxia.”

It is also helping to prevent maternal deaths. “One day a pregnant mother came while in labour,” Tendai recalls. “Out of fear about the costs of transport and the money for a caesarean section she lied, telling me that she’d had a normal birth from the previous pregnancy. But with the new, adequate lighting, l noticed that she had a big scar on her lower abdomen which l suspected to be from a prior caesarean section.”

Tendai was able to use the fetal doppler to listen to the baby’s heart rate, allowing him to detect the presence of any abnormalities. The baby’s heart rate was too slow. “I transferred the patient to the hospital at once, where the doctor informed me that her condition would only allow her to deliver by caesarean procedure. The doctor said that if l had not identified the abnormality and immediately transferred the patient, there were chances that we could have lost both the mother and the baby. Thanks to the new source of light, l was able to detect the physical abnormality and the fetal bradycardia.”

The clinic has seen an increase in productivity and lower maternal mortality rates since the introduction of solar power. The Solar Suitcases are now operational across 759 health centres in Zimbabwe, supporting more than 180,000 deliveries each year.

While this progress is encouraging, much more can be done. At present, Zimbabwe is tapping only a fraction of its full solar potential, estimated to be more than four gigawatts. In 2020, the country installed just 6 MW of new solar energy and now has a total installed capacity of 17 MW.

Despite this, renewable-based systems used to power rural health clinics are already having a transformative impact on the quality of life of rural communities, like the case of Tendai and the Kamabarami Health Clinic. Tendai feels that all clinics should enjoy the benefits of renewable energy solutions like solar power. “This is the best thing that has happened to our clinic. From the first day we used solar power to improve our working condition, we have not had any maternal death. It’s now easier to attend to our patients because we can see what we are doing and where we are going. We are no longer lost in the dark,” he said.

Advancing renewables to improve energy access for rural healthcare facilities requires combined action from both the health and energy sectors. In this respect, IRENA organised a first of its kind conference in 2018 that brought together key energy and health sector stakeholders to advance electricity access for rural healthcare facilities in low-income areas. The mention of specific companies, projects or products does not imply that they are endorsed or recommended, either by IRENA or the author(s). The designations employed, and the presentation of material herein do not imply the expression of any opinion on the part of IRENA or the author(s) concerning the legal status of any region, country, territory, city or area or of its authorities, or concerning the delimitation of frontiers or boundaries.