Renewable energy vital to addressing climate change, energy security and economic development in the U.S. and beyond

Abu Dhabi, U.A.E., 1 June 2015 – Energy industry leaders will meet today in Washington D.C., to discuss renewable energy as an important component of U.S. energy policy – key to addressing the issues of climate change, energy security, and economic development. The event, The Renewable Energy Transition, is co-organized by the International Renewable Energy Agency (IRENA) and the Atlantic Council Global Energy Center. It features speakers from IRENA, the U.S. Department of State, the U.S. Department of Energy and the American Council on Renewable Energy Strategy.

Richard Morningstar, Director of the Atlantic Council Global Energy Center said, "The world tends to see energy geopolitics as relations amongst states that are defined by hydrocarbons, but fails to really incorporate the important role and impact that effective, sustainable energy development can have in addressing security and development challenges around the world."

Amos Hochstein, Special Envoy and Coordinator for International Energy Affairs at the U.S. Department of State said, "U.S. energy security, energy sustainability and climate objectives are mutually reinforcing. As such, we are working to promote energy efficiency, conservation and transformation of energy systems. We are encouraging market reforms, such as the elimination of fossil fuel subsidies, that can address overall energy demand." 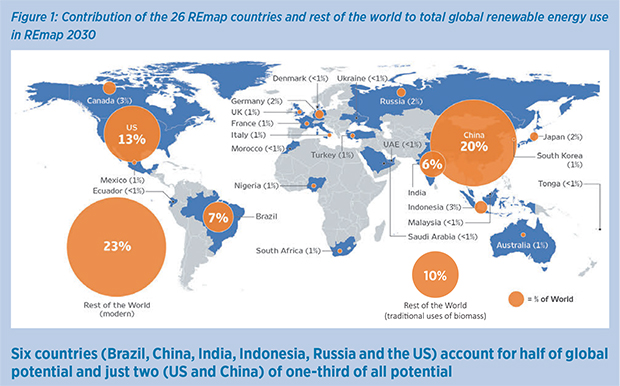 Adnan Z. Amin, IRENA Director-General said, "The U.S. has tremendous renewable energy potential, along with the culture, skills base and financing opportunities needed to become a global centre of renewable energy thought and innovation. Our research finds that the U.S. could install significantly higher amounts of renewables – and that it can do so affordably. Even in a country with cheap shale gas like the U.S., renewable energy is still cost competitive and reduces air pollution, enhances energy security, benefits the economy, and mitigates climate change."

With current policies in place, the share of renewable energy in the U.S. energy mix will only reach 10 per cent by 2030. REmap 2030 estimates that an annual investment of USD 86 billion between now and 2030 is required to reach the 27 per cent renewables mark - an increase of USD 38 billion annually beyond a business-as-usual scenario. But, the higher renewable share will result in an annual savings of USD 30 to 140 billion by 2030 when accounting for factors like human health and reduced emissions.

About the International Renewable Energy Agency (IRENA)
The International Renewable Energy Agency (IRENA) is mandated as the global hub for renewable energy cooperation and information exchange by 140 Members (139 States and the European Union). Roughly 32 additional countries are in the accession process and actively engaged. IRENA promotes the widespread adoption and sustainable use of all forms of renewable energy, including bioenergy, geothermal, hydropower, ocean, solar and wind energy in the pursuit of sustainable development, energy access, energy security and low-carbon economic growth and prosperity.www.irena.org