The International Renewable Energy Agency concluded its 6th Council meeting in Abu Dhabi yesterday. Delegates and representatives of 21 IRENA Members deliberated over two days the Agency’s Work Programme for 2014-2015. This included flagship initiatives to strengthen renewable energy worldwide by addressing key challenges such as costs and grid infrastructure, as well as the global potential of renewables. 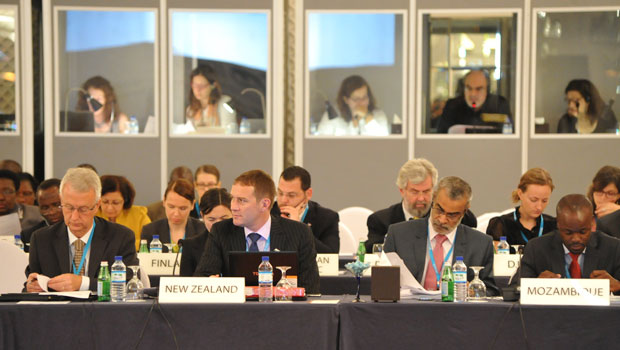 230 representatives from over 80 countries attended IRENA's Council meeting that was held in Abu Dhabi on December 10-11, 2013. The proceedings were translated into English, Arabic, French and Spanish.

“IRENA’s mission is to support countries in their transition to a secure and clean energy future, and to help them identify a path to accelerate the deployment of renewable energy sources,” Adnan Z. Amin, IRENA’s Director-General said at the Council meeting. “With our expert and independent advice, IRENA is making an impact in the world of renewable energy by providing a range of reliable and well-understood services that create fresh momentum,” Mr Amin added. 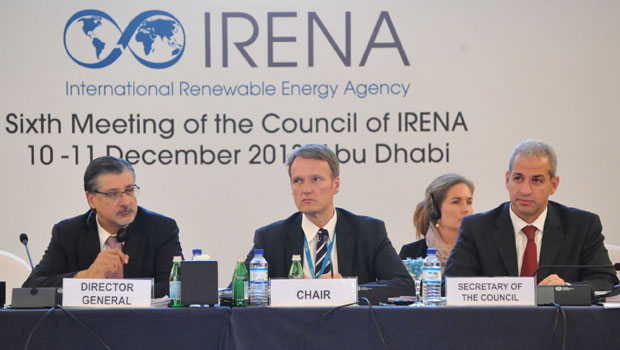 Adnan Z. Amin, IRENA's Director-General, with Karsten Sach, Deputy Director-General, International Cooperation, at Germany's Federal Ministry for Environment, Nature Conservation and Nuclear Safety and Chair of the Council, and Mohammed El Farnawany, IRENA's Chief of the Governance Support Office and Secretary of the Council, at the IRENA Council meeting in Abu Dhabi on Wednesday December 11, 2013.

Initiatives discussed at the Council meeting included a first-of-its-kind web portal dedicated to renewable energy cost analysis, www.irena.org/costs, which is free for all users; and a user’s guide on how to make optimal use of smart grid technologies for the integration of renewables into the grid, “Smart Grids & Renewables – A Guide for Effective Deployment.” The consultations furthermore centred on two major publications that will be published at IRENA’s 4th Assembly in January, the Agency’s institutional publication, REthinking Energy, and a roadmap to double the share of renewables in the energy mix by the end of the next decade, REMAP 2030.

Approximately 230 representatives from over 80 countries attended the two-day Council meeting. They finalized the agenda for IRENA’s 4th Assembly meeting, which will be held in Abu Dhabi on January 18 and 19, 2014. The Assembly kicks off the annual Abu Dhabi Sustainability Week.

About IRENA:
The International Renewable Energy Agency (IRENA) is mandated as the global hub for renewable energy cooperation and information exchange by 120 Members (119 States and the European Union). Over 40 additional countries are in the accession process and actively engaged. Formally established in 2011, IRENA is the first global intergovernmental organisation to be headquartered in the Middle East.
IRENA supports countries in their transition to a sustainable energy future, and serves as the principal platform for international cooperation, a centre of excellence, and a repository of policy, technology, resource and financial knowledge on renewable energy. IRENA promotes the widespread adoption and sustainable use of all forms of renewable energy, including bioenergy, geothermal, hydropower, ocean, solar and wind energy in the pursuit of sustainable development, energy access, energy security and low-carbon economic growth and prosperity.