As the world’s youngest continent, Africa is expected to be home to nearly 2.5 billion people by 2050. Eighty percent of them will live in Sub-Saharan Africa, where less than half of all people have access to electricity today, and as little as 16% have access to clean cooking fuels and technologies. Africa is also among the most vulnerable parts of the world in the face climate change, and is already experiencing an increase in devastating flood- and drought-related food insecurity according to the latest IPCC report on climate mitigation.

The energy transition, with its systematic shift to renewable energy needs to be understood not as a burden impost on the world’s most vulnerable people, but as a vast opportunity to improve livelihoods across Africa in ways that transcend purely economic benefits. IRENA’s report Renewable Energy Market Analysis: Africa and its Regions, reveals a global reduction in CO2 emissions in line with the Paris agreement could have a significant, positive impact on gross domestic product (GDP), job creation, and welfare across Africa, through ways such as reduced climate impacts, improved public health, and the creation of new industries that support the Energy Transition in and outside of Africa.

The energy transition under IRENA’s 1.5-S pathway, which measures the socio-economic outcomes under an energy scenario conform with the Paris Agreement, boosts Africa’s GDP throughout the entire outlook period up to 2050, compared with a planned policies scenario (PES). On average, GDP is 7.5% higher in the first decade, and 6.4% higher over the nearly three decades until 2050. The figure below shows relative differences between the scenarios, in percentages. 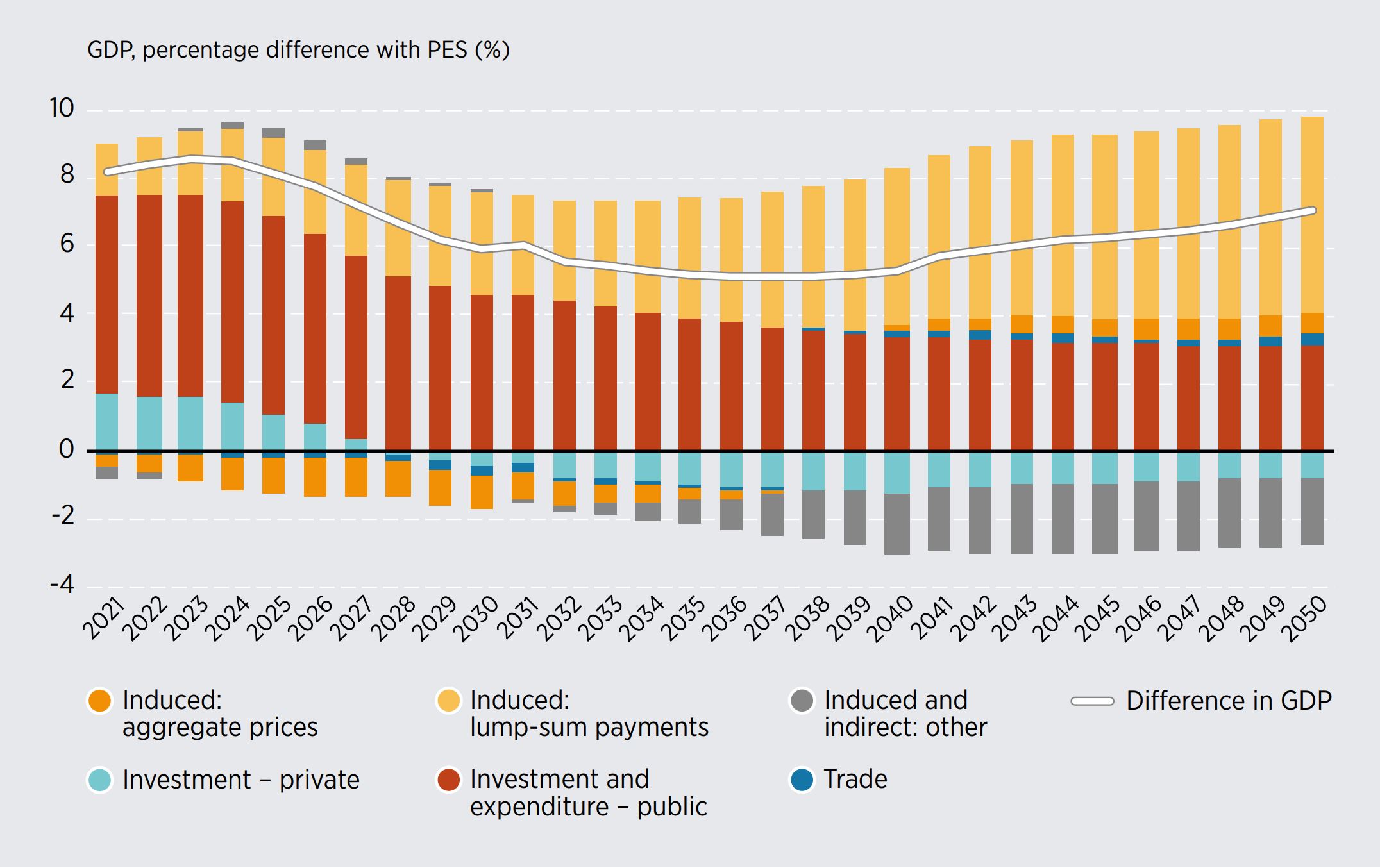 Much of this growth stems from the role the energy transition plays to boost demand for new product ranges and services, and to promotes innovation in new technologies and knowledge-based products, thereby also generating jobs. While fossil fuel industries (coal, oil and natural gas) stand to lose under the energy transition, African economies can leverage on domestic strengths, increasingly addressing the value chain of manufacturing through domestic industrialisation. Education and training opportunities help build the basis for this development.

Impact on job creation and beyond

By driving the development of new industries, the energy transition can also become a major job creation opportunity for Africa. IRENA’s analysis shows that renewables and other energy transition–related technologies have already created 1.9 million jobs across Africa, a number that will grow substantially as countries invest further in the energy transition. Under the 1.5-S pathway, economywide employment on the continent is 3.8% higher in 2030, and 3.6% higher in 2050, than under PES. Ripple effects of transition-related economic changes mean many new jobs are created across sectors and beyond energy. This is particularly important, since the African Development Bank (AfDB) estimates that each year more than 10 million youth enter the workforce in Africa, yet only 3 million new jobs per year are currently created.

Difference in economy-wide employment between 1.5-S and PES with its drivers, Africa, 2021-2050 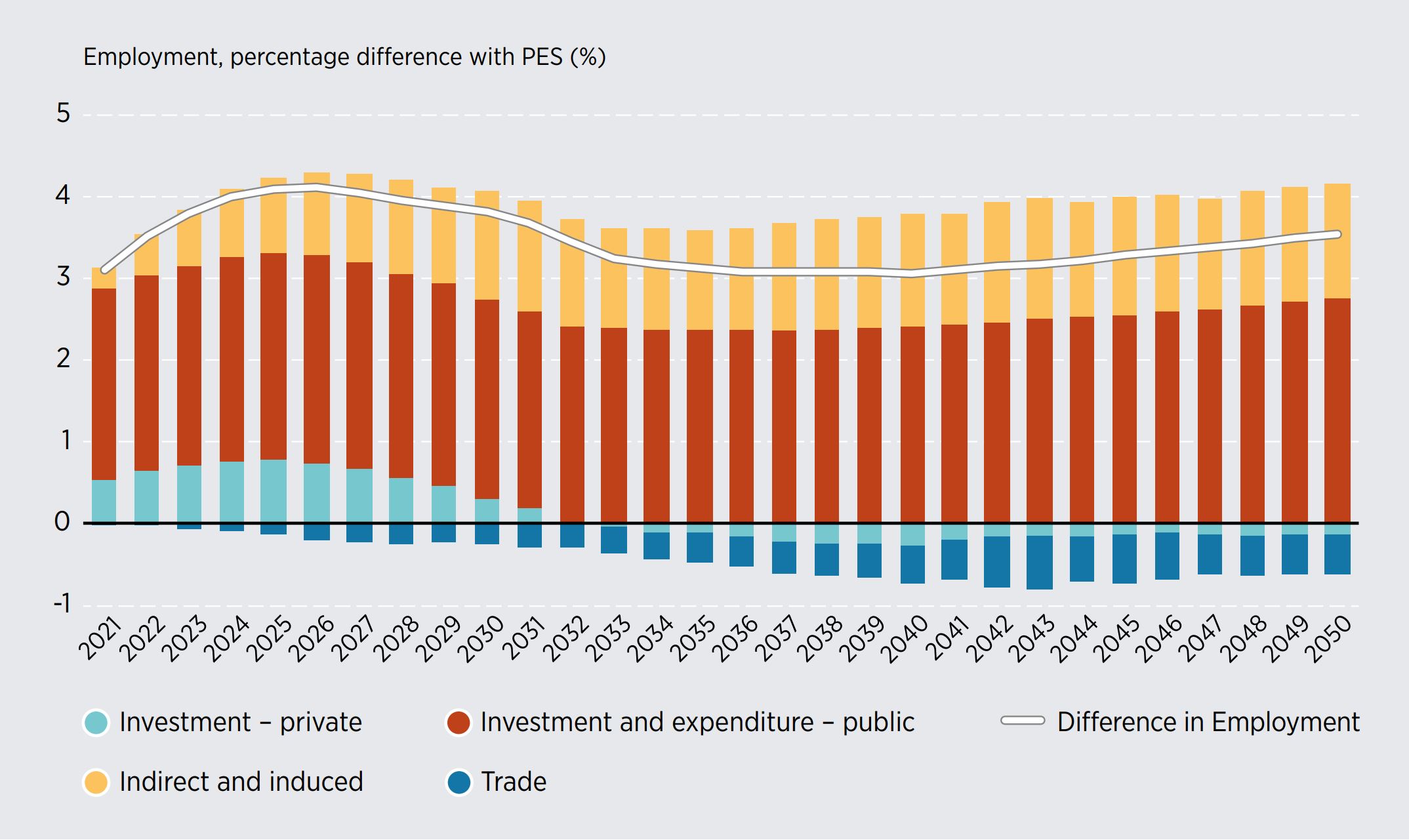 Most affected in the energy sector from job losses will undoubtedly be the fossil fuel industry and related value chains, including mining, extraction, refining, distribution/logistics and power generation with fossil fuel sources. Under 1.5-S, the fossil fuel sector would employ 2.1 million people less in 2030 and 4.2 million less in 2050 than under PES. But this need not lead to unemployment; transition-related sectors more than offset these losses and provide many more alternative job opportunities within the energy sector than under PES.

Overall, the energy transition has the potential to create more than 9 million additional jobs between 2019 and 2030, and an additional 3 million jobs by 2050. Renewable energy is one of the most important sectors gaining in job creation potential over the outlook period. The energy transition has the potential to boost employment in the renewable energy sector substantially in Africa, up from around 0.35 million in 2020 to over 4 million by 2030 and over 8 million by 2050 under 1.5-S. This is a 20-fold increase by 2050 from today’s values, and four times as many jobs as without the energy transition. Many of the renewable energy jobs in 1.5-S are in solar, bioenergy, wind and hydropower. 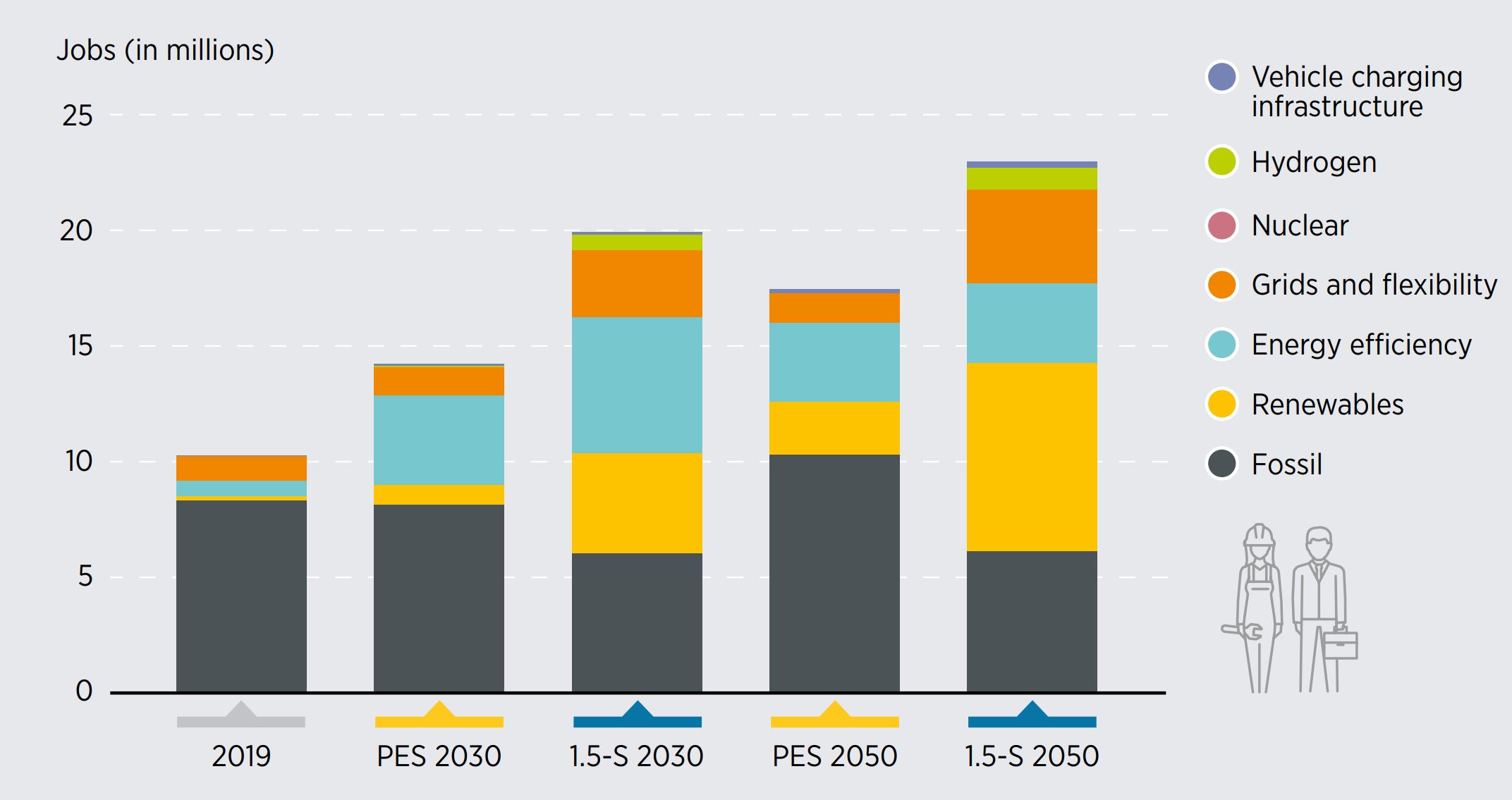 (Re-)training and education policies are a critical tool to open up opportunities to create new value chains for renewable energy in African countries, and to allow a transfer of skilled labour from the fossil fuel industry to the renewable energy sector.

The most important effect of the energy transition on Africa is its massive impact on welfare. IRENA quantifies the impact of the energy transition through its Welfare Index, which captures different dimensions of welfare beyond just economic growth and job creation. Both in absolute terms, and measured through percentage differences among the scenarios, the global transition away from fossil fuels leaves people better off in Africa, as illustrated in the figure below, which presents the relative difference in welfare indices between PES and 1.5-S, by 2050.

Welfare Index percentage difference between 1.5-S and PES for Africa and its regions by 2050 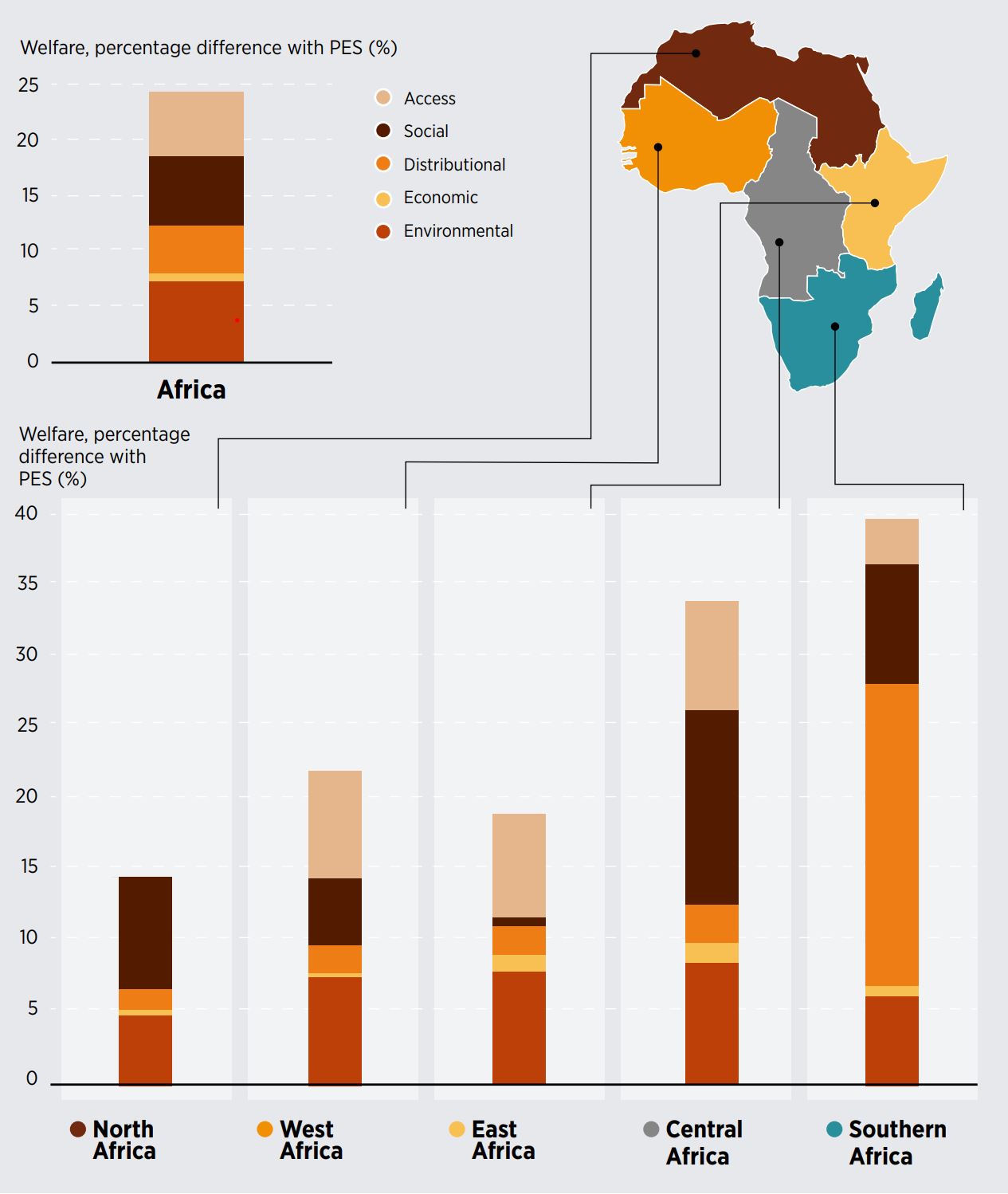 The benefits go beyond universal access to energy and vast reduction of climate change-related damages. The transition massively improves public health through reduced air pollution, generates distributional benefits, and thus reduces inequality. The welfare improvement for the African continent under 1.5C-S over PES reaches 24.3% by 2050, ranging from 14.6% in North Africa to 39.6% in Southern Africa.

The enormous potential of the energy transition’s wide socio-economic benefits including in Africa lies on the assumption that proactive energy transition policies focused on generating these benefits are put in place. Many of these policies are already known and discussed; investment in, and promotion of education and training in modern sciences and technology; good governance, creating alternative social safety nets that protect the poor and help them access health, education, and modern energy in order to help themselves. It is also important for governments to create incentives for business, including an attractive investment climate, including in the energy sector.

A comprehensive approach requires strategic vision, a broad policy framework, financial resources on a large scale, and institutional capacities to carry out the strategy. Two other elements are critical for the ability of African countries to play their part in the energy transition, and to benefit from it; one is a moderate carbon price set low enough to reduce negative impacts on most vulnerable groups in the population, and the other is international cooperation through collaborative finance dedicated to Africa’s energy transition.

Read more from IRENA’s and the AfDB’s report, Renewable Energy Market Analysis: Africa and its Regions, where a recommendation is made to pursue the energy transition’s wide benefits through a comprehensive policy package, under the framework of African Green Deal.