It is widely accepted that the deployment of renewable energy technologies must be scaled up significantly to accelerate the global energy transition. To achieve the target of generating 57 percent of total power from renewables by 2030 will require a doubling of current investments – amounting to over USD 700 billion per year in total.

As the costs of renewable energy steadily decline, the sector is becoming increasingly attractive to those looking for stable and cost-effective investments that offer consistent and predictable returns alongside significant potential to stimulate employment and global economic recovery.

However, in developing countries most renewable energy investments still come from international development and credit export institutions. Given their limited appetite for risk, domestic financial institutions (FI) in these countries are often reluctant to lend to renewable projects that rely on technologies that are yet to be proven in local conditions. 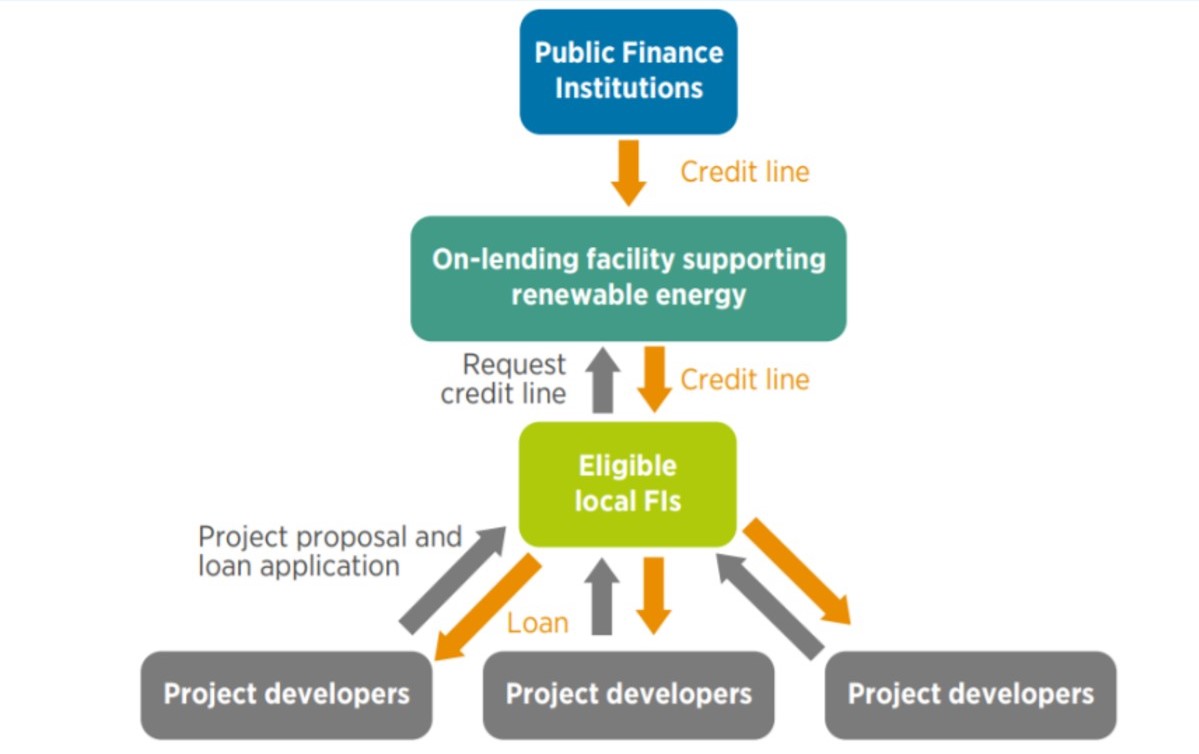 Example of a typical lending approach

Another put-off for investors is the lack of local currency finance. When a mismatch exists between project financing and income – the former being in hard, foreign currency and the latter in local currency – project cash flows are vulnerable to fluctuations in the value of the local currency.

Domestic financial institutions are best placed to mitigate this risk, given their established local networks and multi-sector know-how. Their role should therefore be enhanced as lenders to renewable energy projects, making such investments more attractive and cost-effective both for investors and developers.

a. Local currency components in project financing lead to corresponding reductions in currency risks. Every project has a share of local supplies, contracts and costs – opening the door for domestic financial institutions to co-finance with other lenders to share project risks whilst also progressively expanding their experience and risk appetite in the sector.

b. Domestic institutions can channel funds from international development finance institutions by breaking them into smaller loans in local currencies, enhancing the financial liquidity of the sector and potentially lengthening loan tenures. Successful examples of this approach include loans managed by the Development Bank of Southern Africa, the Indian Renewable Energy Development Agency, QNB Alahli of Egypt, PT SMI of Indonesia and Corporación Andina de Fomento.

c. Domestic currency loans can also be used to refinance operational renewable energy assets. Once a renewable energy project is completed and has been operational for some time, its risk rating reduces considerably; with  assembled assets being available as collateral, such projects become more attractive for refinancing with domestic currency loans at more favourable rates.

As domestic financial institutions begin to mitigate credit risks, access competent technical assistance and assess renewable energy investments, they will ultimately come to represent reliable partners in project development. To this end, IRENA, in partnership with regional agencies, has initiated capacity building programmes for domestic financial institutions. The programme is being piloted in the Pacific region, but will be progressively rolled out to other regions as part of the technical assistance pillar of the IRENA for Climate Investment Platform (CIP).

IRENA for CIP is keen to hear the readers’ great ideas, stories or experience on domestic currency lending. Please write to us to share examples from your countries.