The door is still open to achieve the 1.5°C goal by mid-century but the priority now is to move away from pledges and firmly towards implementation, said Francesco La Camera, Director-General of the International Renewable Energy Agency (IRENA). His comments were made in the aftermath of the recently concluded Leaders Summit on Climate hosted by the President of the United States of America, Joe Biden.

Mr. La Camera said the summit was a sign that multilateralism is alive and well, and that climate change has helped forge new areas of cooperation between states. Crucially, he said the event offered clear hope that a 1.5°C future is still possible despite the challenges. “What is encouraging, is that the commitments being made by the world’s major polluters leave the door to 1.5°C future still open,” he said at a high-level event hosted by the Atlantic Council in the aftermath of the Summit. 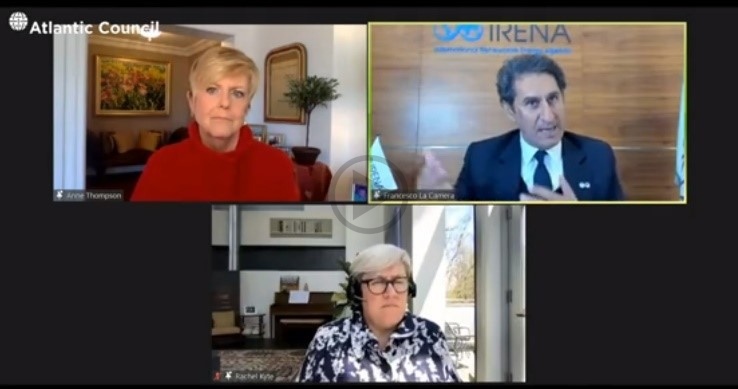 “We need to see what other countries will commit before or during COP26 to know whether this is possible,” he continued. The Director-General went on to say that during this critical year of action, leaders of G20, G7 and UN High-Level Dialogue on Energy meetings should come together to ensure the decarbonisation discussion is maintained as a central thread running throughout the high-level political agenda for the year.

Welcoming President Biden’s Leaders Summit pledge to reduce greenhouse gas emissions in the United States of America by up to 52% by 2030 relative to 2005 levels, Mr. La Camera said the Agency supported the announcement and reinforced the importance of putting the energy decarbonisation agenda at the heart of implementation.

Much of President Biden’s low-carbon agenda is built around realising the significant economic opportunities presented by the energy transition such as creating well-paid jobs and pursuing clean technology leadership, said Mr. La Camera. Articulating the benefits of transitioning the energy system have long been pillars of IRENA’s analytical work. IRENA has demonstrated through its work that the transition is economically beneficial and socially attractive.

The Agency’s recently released a 1.5°C compliant energy scenario, the World Energy Transitions Outlook preview, shows the energy transition needed to align with a net-zero future by mid-century is possible largely with existing technologies but requires a significant scale up of transition related investments and a diversion of capital away from fossil fuel investments.

Mr. La Camera urged governments to abandon the negotiation of text at the upcoming COP26, and instead move towards showcasing the most efficient solutions and best practices to implement the Paris Agreement. He also stressed that while existing technologies can be the backbone of the transition, emerging solutions such as green hydrogen could become mainstream much earlier than first envisaged.

“What is absolutely clear, is that this is the decisive decade of action and in this respect, we have to make technologies choices that can make the most immediate difference. Renewable energy is a ready option. In this respect, investments in infrastructure that support system flexibility, grid interconnectivity and integration of electric mobility, are a priority.”