"What is the utility business model after all? It’s making returns on assets. And moving from fossil fuels to renewables will increase the asset base and the actual value of the utility, increasing its revenues."- Dutch Kuyper, Parker Ranch

The workshop seeks to develop solutions for the region’s significant energy challenges by devising strategies to increase the capacity of Pacific island governments and design policies and regulations conducive to the accelerated deployment of renewable energy. It is organised by the Secretariat of the Pacific Community (SPC) in partnership with the U.S. Department of State and IRENA.

Among other activities, IRENA presented a review of the policy frameworks of four Pacific Island countries and their readiness to deploy renewables. In its final session on 23 July, IRENA will present the outcome of the “Quickscan,” an assessment of the enabling framework for renewables, undertaken for the 12 Pacific island partners of the SIDS Lighthouses Initiative. One of Quickscan’s main features provides an à la carte menu for designing more effective programmes in support of the transition of SIDS towards a renewable energy future. 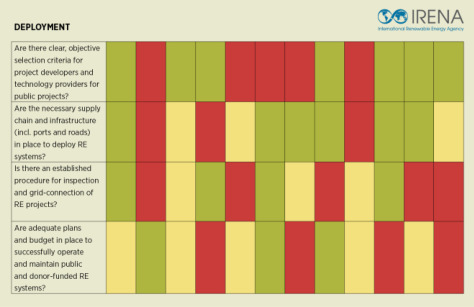 “This week’s workshop represents an important stepping stone on the road to the Paris climate talks. It contributes to the objectives of small island developing states to plan and implement their energy transition, and builds upon the recently adopted Martinique Action Plan.”-Emanuele Taibi, IRENA’s Islands Roadmaps Analyst

This workshop is part of a series of four conferences on renewables within the framework of the SIDS Lighthouses Initiative, which aims to advance a holistic approach to renewable energy deployment in island settings. The conferences are helping accelerate progress in preparation for the upcoming Paris climate talks (COP21) in December.

A previous islands event was held in Martinique in June, in cooperation with the Government of France and the Martinique local government. Its outcome document, the Martinique Action Plan, sets a clear agenda for next steps to accelerate deployment of renewable energy in SIDS. The next conference, supported by the Government of Japan, will bring participants to Kuala Lumpur, Malaysia, to discuss developing and financing SIDS renewable energy projects. The fourth conference of this series will take place in South Africa on the sidelines of the South Africa International Renewable Energy Conference, supported by the Government of Germany.

And the final milestone for the islands and renewables series will take place at COP21 in Paris this December, during which IRENA, together with partners, will host an event showcasing progress made on the SIDS Lighthouses Initiative to date.