“Renewable energy deployment continues to surge in markets around the globe, even in an era of low oil and gas prices. Falling costs for renewable energy technologies, and a host of economic, social and environmental drivers are favoring renewables over conventional power sources,” said IRENA Director-General Adnan Z. Amin. “This impressive growth, coupled with a record $286 billion invested in renewables in 2015, sends a strong signal to investors and policymakers that renewable energy is now the preferred option for new power generation capacity around the world.”

2015 was a record year for both wind and solar due in large part to a continued decline in technology costs. Wind power grew 63 GW (17%) driven by declines in onshore turbine prices of up to 45% since 2010. Solar capacity increased 47 GW (26%) thanks to price drops of up to 80% for solar photovoltaic modules in the same time period. Hydropower capacity increased by 35 GW (3%), while both bioenergy and geothermal energy capacity increased 5% each (5 GW and 1 GW respectively).

Overall, capacity has increased by roughly one-third over the last five years, with most of this growth coming from new installations of wind and solar energy.

In terms of regional distribution, the fastest growth in renewable generation capacity came in developing countries. Central America and the Caribbean expanded at a rate of 14.5%. In Asia, where additions accounted for 58% of new global renewable power generation capacity in 2015, capacity expanded at a rate of 12.4%. Capacity increased by 24 GW (5.2%) in Europe and 20 GW (6.3%) in North America.

“The significant growth rates for renewable generation capacity in developing economies are a testament to the strong business case for renewable energy,” said Mr. Amin. “Renewables are not just a solution for industrialized countries, they are also powering economic growth in the fastest growing economies in the developing world.”

At year end, hydropower accounted for the largest share of the global total renewable power generation capacity with an installed capacity of 1,209 GW, the majority of which are large-scale plants. Wind and solar energy accounted for most of the remainder, with an installed capacity of 432 GW and 227 GW respectively. Other renewables included 104 GW of bioenergy, 13 GW of geothermal energy and about 500 MW of marine energy (tide, wave and ocean).

Hydropower: In 2015, three-quarters of new hydro capacity was installed in Brazil, China, India and Turkey (26.3 GW in total). More than one GW of new capacity was also installed in Europe, North America and the Middle East (Iran), plus 550 MW in Africa.

Wind energy: About 95% of wind capacity is now located in Asia (China and India), Europe and North America; and 90% of new capacity was installed in those regions in 2015 (57.1 GW). Wind energy is also starting to expand rapidly in other regions such as South America, where capacity increased by 3.1 GW (40%) in 2015

Solar energy: The major solar development in 2015 was the 48 % increase in solar capacity in Asia, with 15 GW of new capacity installed in China and another 10 GW in Japan. An increase of 8 GW in North America also surpassed the level of new installations in Europe (7.6 GW) for the first time. Capacity also expanded significantly in Oceania and Africa, with additions of 1 GW and 0.9 GW respectively. At the end of 2015, Europe accounted for 43% of global solar capacity, with another 40% in Asia (mostly China and Japan) and 13% in North America.

Geothermal energy: Geothermal power capacity increased by about 600 MW in 2015. Four countries (Italy, Mexico, Turkey and the United States of America) accounted for almost all of this increase.

Renewable Energy Capacity Statistics 2016 offers the most comprehensive, up-to-date and accessible figures on renewable energy capacity statistics. It includes figures from 2000 to 2015, and contains 13,546 data points from more than 200 countries and territories. 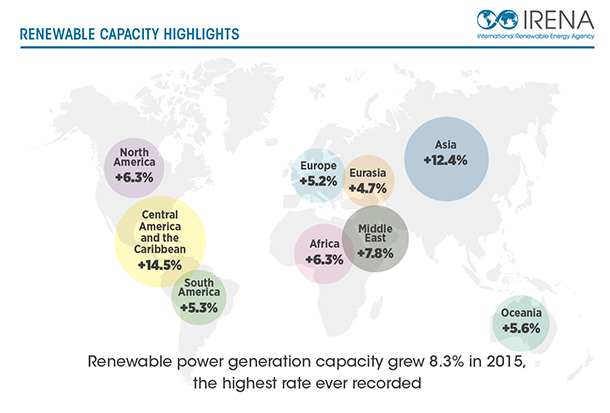 About the International Renewable Energy Agency (IRENA)
The International Renewable Energy Agency (IRENA) is mandated as the global hub for renewable energy cooperation and information exchange by 146 Members (145 States and the European Union). 30 additional countries are in the accession process and actively engaged. IRENA promotes the widespread adoption and sustainable use of all forms of renewable energy, including bioenergy, geothermal, hydropower, ocean, solar and wind energy in the pursuit of sustainable development, energy access, energy security and low-carbon economic growth and prosperity. www.irena.org 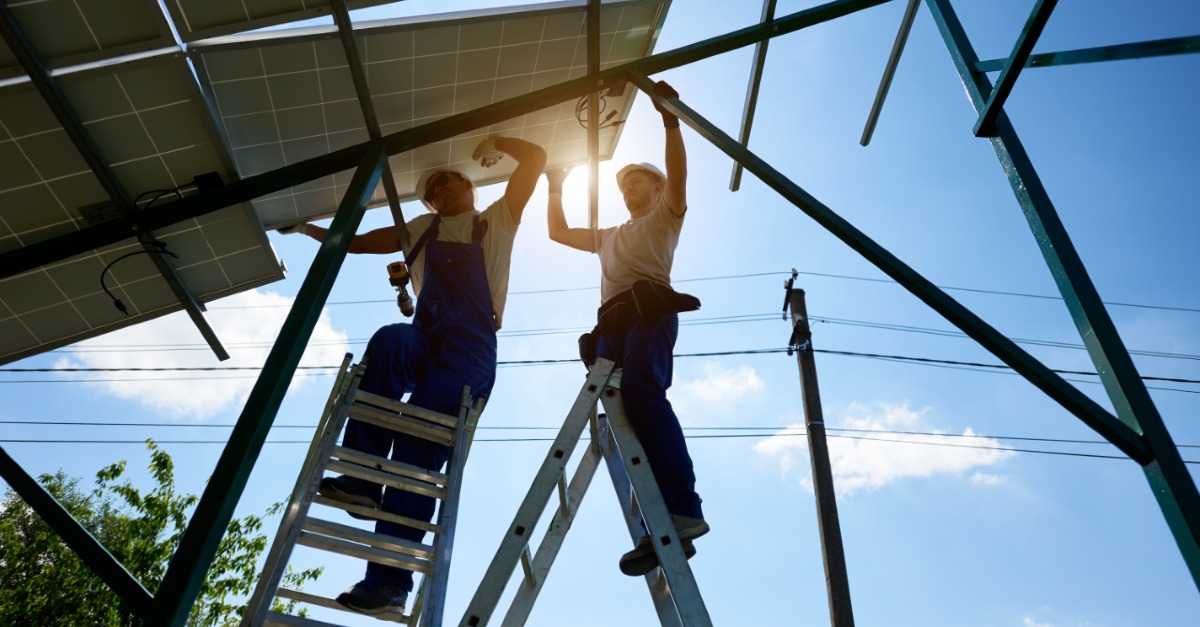 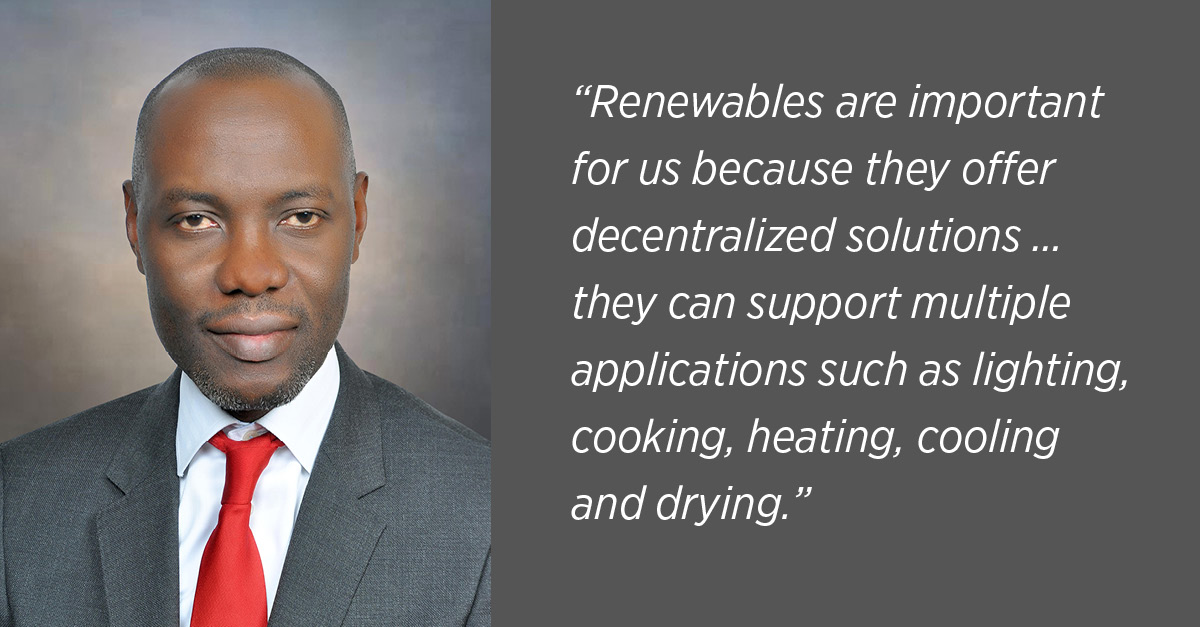 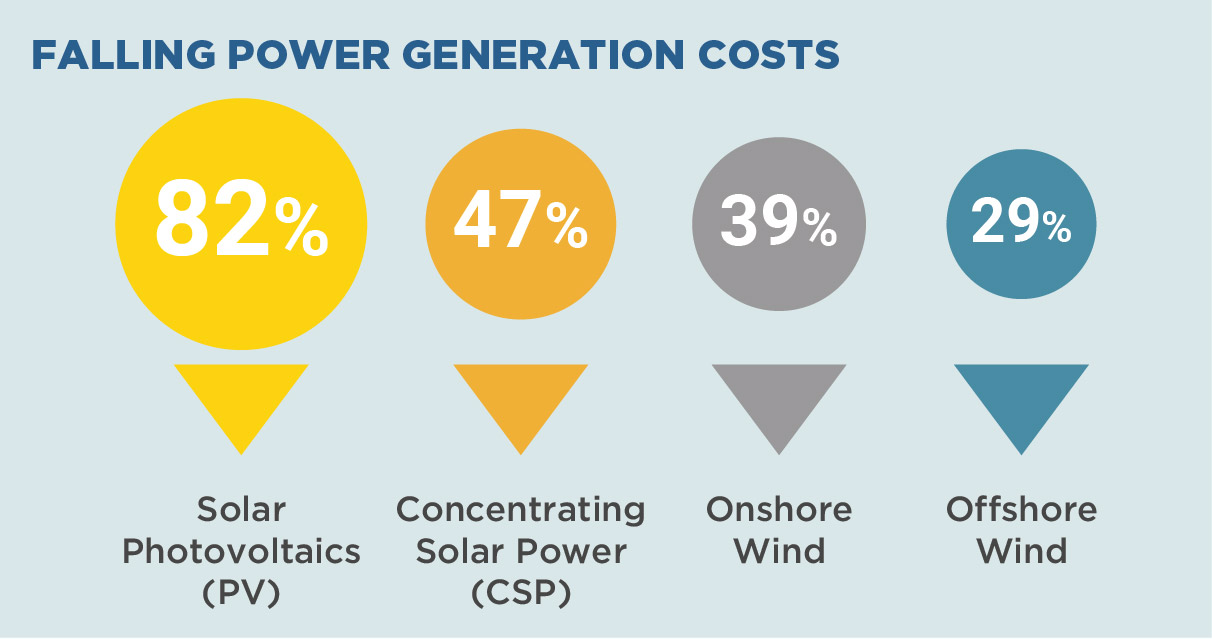