In 2013, approximately 6.5 million people were already employed in the renewable energy industry worldwide, a new study by the International Renewable Energy Agency reveals. ‘Renewable Energy and Jobs – Annual Review 2014’ underlines the important role that renewables continue to play in employment creation and growth in the global economy.

The comprehensive annual review shows steady growth in the number of renewable energy jobs worldwide, which expanded from 5.7 million in 2012, according to IRENA. 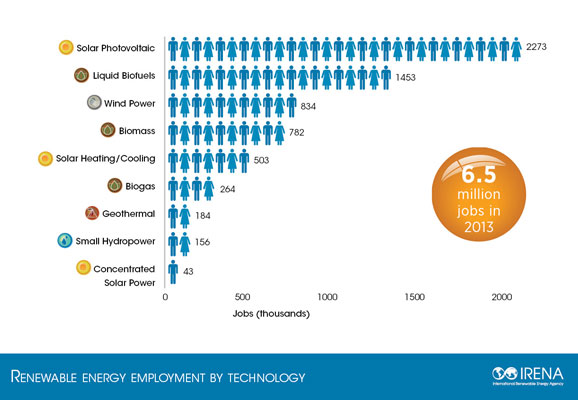 “With 6.5 million people directly or indirectly employed in renewable energy, the sector is proving that it is no longer a niche, it has become a significant employer worldwide,” said IRENA Director-General Adnan Z. Amin. “The insights into shifts along segments of the value-chain revealed in the report are crucial to developing policy that strengthens job growth in this important sector of the economy.”

Renewable energy employment was shaped by regional shifts, industry realignments, growing competition and advances in technologies and manufacturing processes in 2013. The largest employers by country are China, Brazil, the United States, India, Germany, Spain and Bangladesh, while the largest employers by sector are solar photovoltaic, biofuels, wind, modern biomass and biogas. 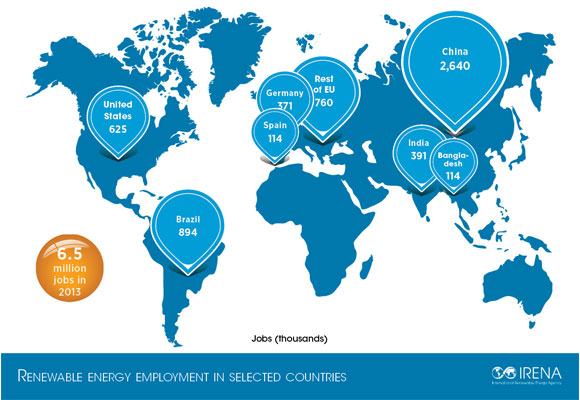 Among other updates, the 6.5 million figure published in the annual review reflects growth in Chinese numbers, which can be attributed to a significant increase in annual installation and manufacturing activity and differences in the way employment figures are estimated. IRENA estimates a five-fold increase of solar PV installations in China from 2011 to 2013.

“Surging demand for solar PV in China and Japan has increased employment in the installation sector and eased some PV module over-supply concerns,” said Rabia Ferroukhi, heading the Knowledge, Policy and Finance division at IRENA and lead author of the report. “Consequently some Chinese manufacturers are now adding capacity.”

In the wind industry, China and Canada provided positive impulses while the outlook for the United States remains somewhat mixed because of political uncertainty. The offshore wind industry is still concentrated in Europe, particularly the United Kingdom and Germany.

The review is being presented Monday at the Clean Energy Ministerialin Seoul, South Korea, a meeting of energy ministers and other high-level officials from 23 countries focused on assessing progress and identifying tangible steps toward accelerating the transition to a global clean energy economy.

‘Renewable Energy and Jobs – Annual Review 2014’ is the second annual jobs report published by IRENA. It is available to download at www.irena.org/REjobs

About the International Renewable Energy Agency :

The International Renewable Energy Agency is mandated as the global hub for renewable energy cooperation and information exchange by 131 Members (130 States and the European Union). About 40 additional countries are in the accession process and actively engaged. IRENA supports countries in their transition to a sustainable energy future, and serves as the principal platform for international cooperation, a centre of excellence, and a repository of policy, technology, resource and financial knowledge on renewable energy. The Agency promotes the widespread adoption and sustainable use of all forms of renewable energy, including bioenergy, geothermal, hydropower, ocean, solar and wind energy in the pursuit of sustainable development, energy access, energy security and low-carbon economic growth and prosperity.