El Salvador’s National Energy Council recently announced plans to auction 150 MW of renewable energy projects. Brazil awarded contracts to the developers of 669.5 MW of clean energy capacity last week in its latest auction. And the ACT government in Australia has launched its second large-scale wind farm auction, which is expected to double the amount of electricity the region buys from wind farms within three years.

As evidenced around the world, countries that seek sustainable and affordable energy solutions are turning to auctions as an instrument of choice to reach a competitive price for renewable energy electricity. Recently, the considerable decline in the cost of renewable energy technologies has made it challenging to set appropriate levels of public support for their deployment, while maintaining a stable and attractive environment for investment. This is partly the reason why the auction has come to the fore as an effective way to promote renewable energy deployment.

The increasing interest in auctions is also driven by their ability to achieve deployment in a well-planned, cost-efficient and transparent manner. Because of this, auctions, with their ability for real price-discovery, have emerged as a key policy instrument for many countries to promote the energy transition. Auctions facilitate the raising of capital in countries with risky environments as well.

Renewable energy auctions are competitive bidding procurement processes for electricity, either specifically from renewables or where renewable energy technologies are eligible. Typically, a government issues a call for tenders to install a certain capacity of renewable energy-based electricity. Project developers submit their bids. The government then evaluates the offers, and this results in a power purchase agreement with the successful bidder.

To date, more than 60 countries predominantly in the developing world, including Brazil, China, Morocco, Peru and South Africa, have turned to renewable energy auctions, mainly to attract competition and drive down the resulting electricity costs. 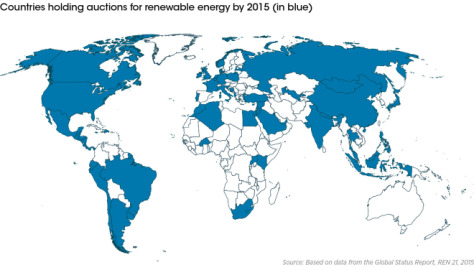 An infographic from Renewable Energy Auctions: A Guide to Design

In fact, the growth of countries adopting auctions has outpaced that of other instruments, such as the feed-in tariff and the quantity-based Renewable Purchase Obligation since 2010, as they incorporate both tariffs and quantity considerations.

An infographic from Renewable Energy Auctions: A Guide to Design

In line with the vertical unbundling that arose in the late 1980s, governments and state utilities set out to procure new electricity capacity from independent power producers. The first auctions for long-term electricity contracts happened in the 1990s. The UK Non Fossil Fuel Obligation, until 1998, sought bids to produce a specific amount of electricity from chosen technologies at a certain price.

More recently, with a second wave of power sector reforms, Brazil, Canada, Chile, China and Ireland were among the first countries to adopt auctions, in some cases facilitating the transition from monopolistic to liberalised markets. This has helped ensure an adequate volume of new power generation in a number of countries with rapidly increasing electricity consumption.

Auctions have become increasingly successful and sophisticated in their design and many lessons can be learnt from the vast pool of country experiences, in terms of attracting a large number of players, increasing competition and ensuring lower costs. There is no “one-size-fits-all” formula for successful auctions. Different design elements should be selected and combined in a way that is tailored to meet the goals of the auction, according to the country’s specific requirements and characteristics.

For more on the strengths, weaknesses and main design elements of this important policy instrument, see: Renewable Energy Auctions: A Guide to Design